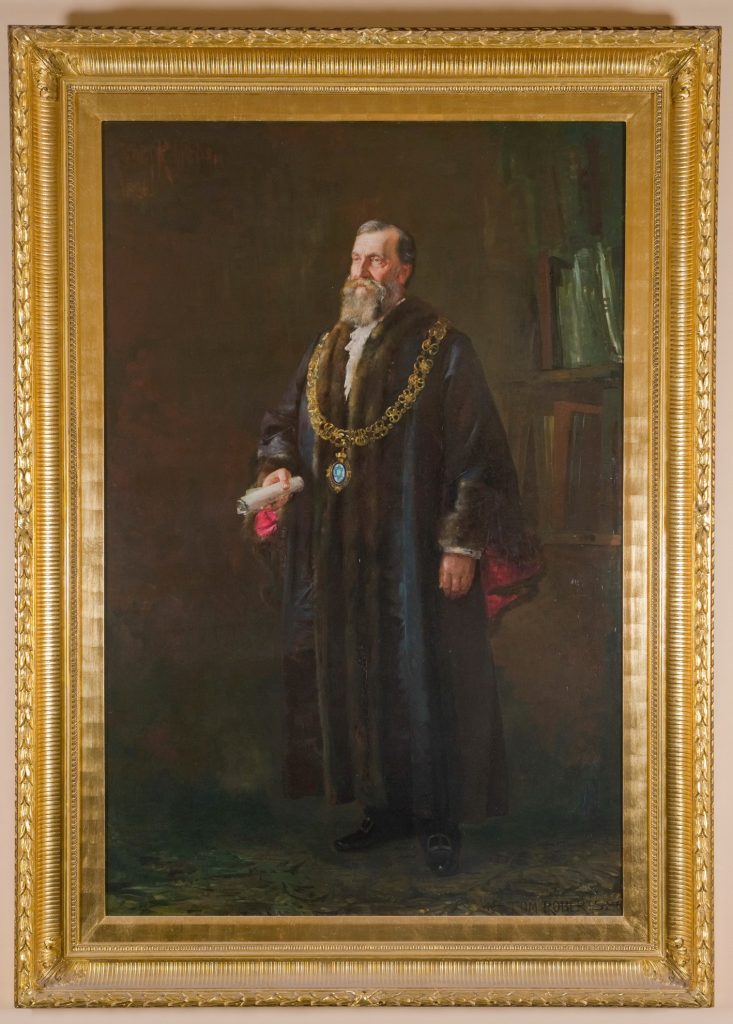 This full-length portrait of Alderman Amess, mayor during 1869–70, was one of the few that survived the Town Hall fire of 1925. Samuel Amess was born in Scotland in 1826, where he was apprenticed as a stonemason. In 1852, he was attracted to Victoria by the promise of gold. He was so successful on the gold fields that early in 1853 he returned to Melbourne to establish a business as a building contractor. By the 1870s he was regarded as one of Melbourne’s foremost builders. The contracting firm he established undertook many of the large government projects. Amess built several of Melbourne’s notable 19th-century buildings, including the General Post Office, Customs House, the Government Printing Office, the old Exchange Buildings in Williams Street, the Gold Treasury and the Kew Lunatic Asylum. He also built several country train stations, including the Ballarat Station. Amess was mayor in the year the new Town Hall was officially opened. He personally organised and paid for a celebratory fancy dress ball and commissioned a cantata by Kendall and Horsley, which was performed at a concert for 4500 people. Amess described his 'sparing the corporable funds' as 'a simple act of duty'. In fact, 20,000 people were invited to the various celebrations, all paid for by Amess. Tom Roberts (1856–1931) is one of Australia’s best known artists. He was a founding member of the Heidelberg School and organised the groundbreaking '9x5' Impressions exhibition. His work includes the famous 'Shearing the Ram's and the official group portrait of the opening of the first Federal Parliament in Melbourne. When renowned contemporary artist Callum Morton was commissioned in 2013 to respond to the Art and Heritage Collection, he was so taken with this Tom Roberts painting that he used its form for one of his ‘cover ups’, an artwork that he titled ';Mayor';.