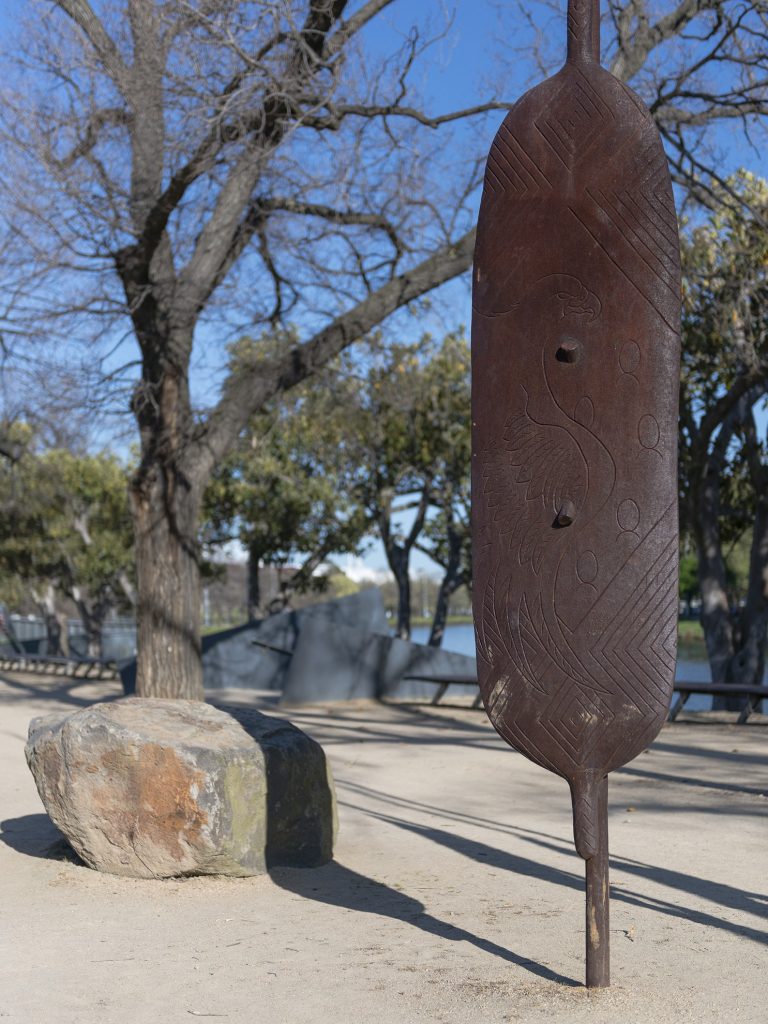 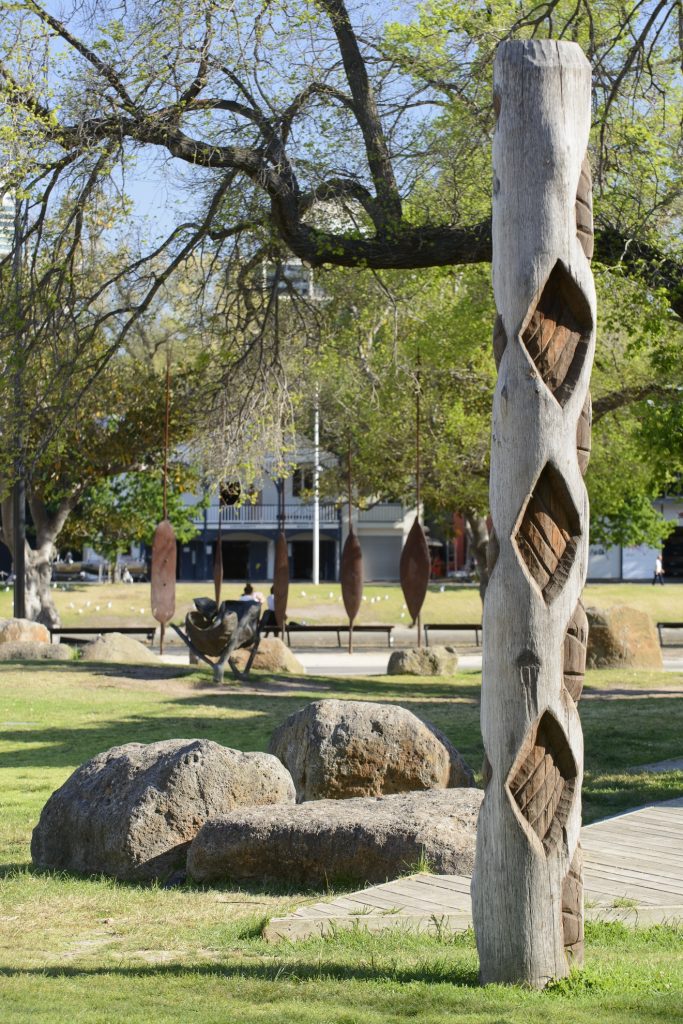 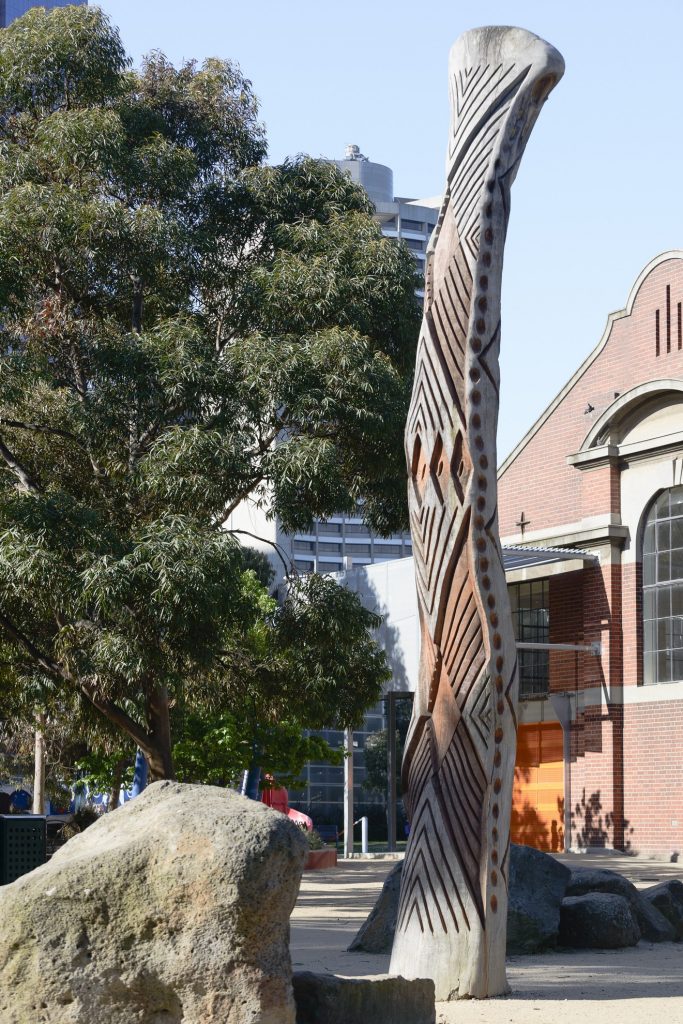 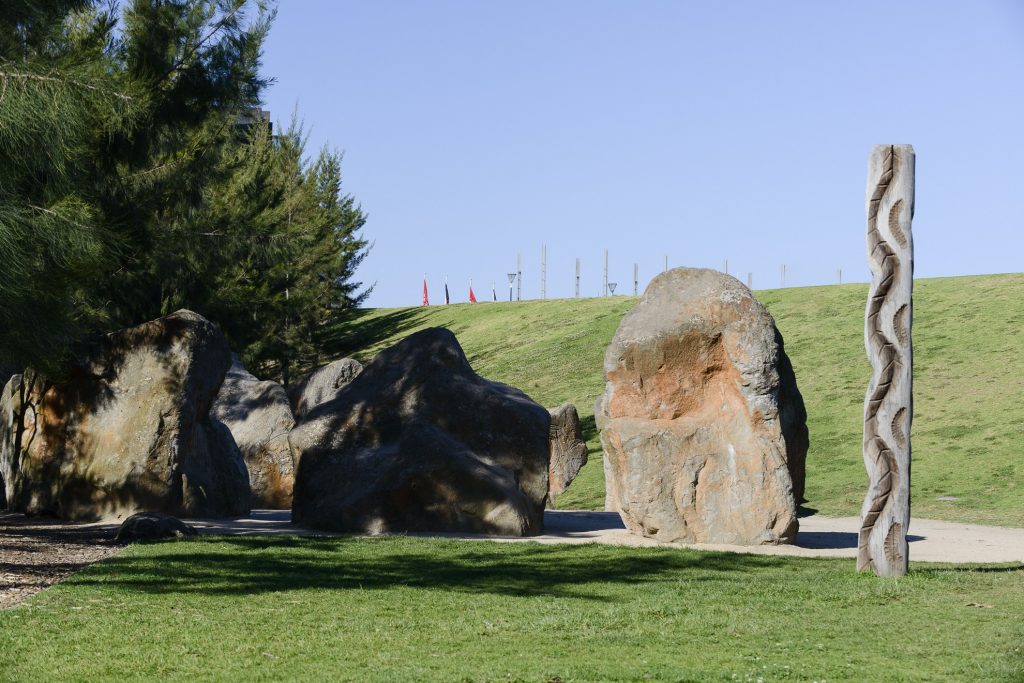 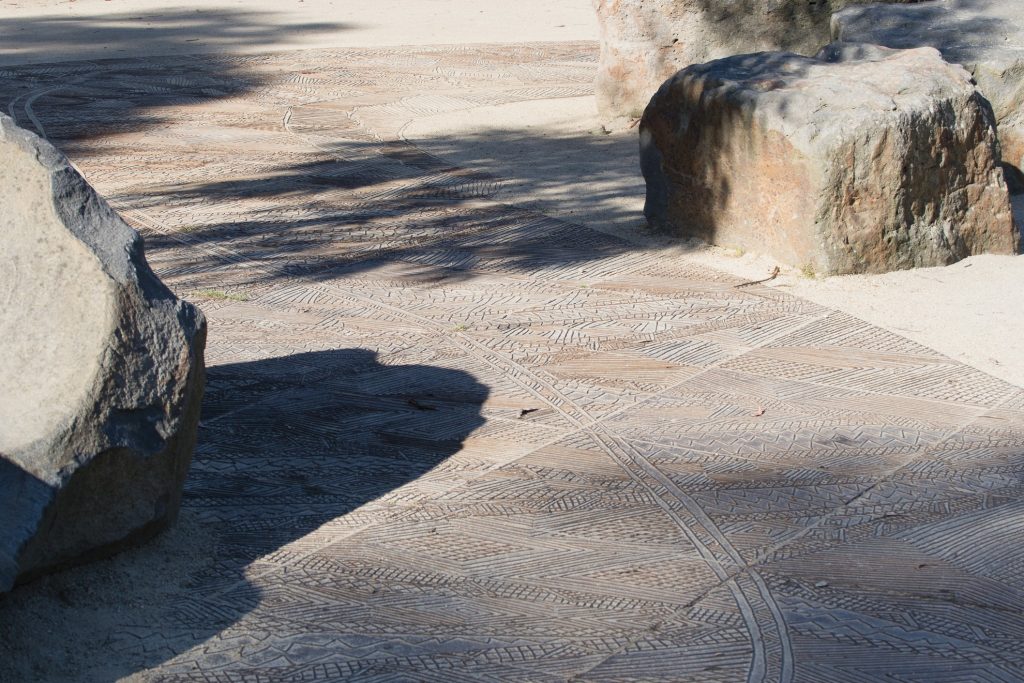 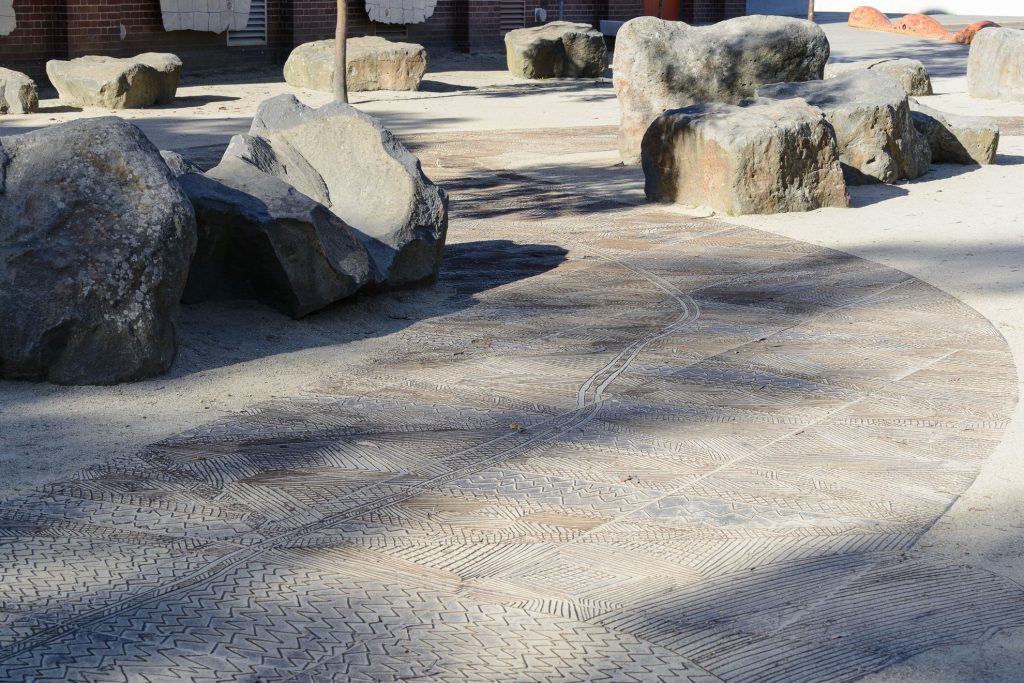 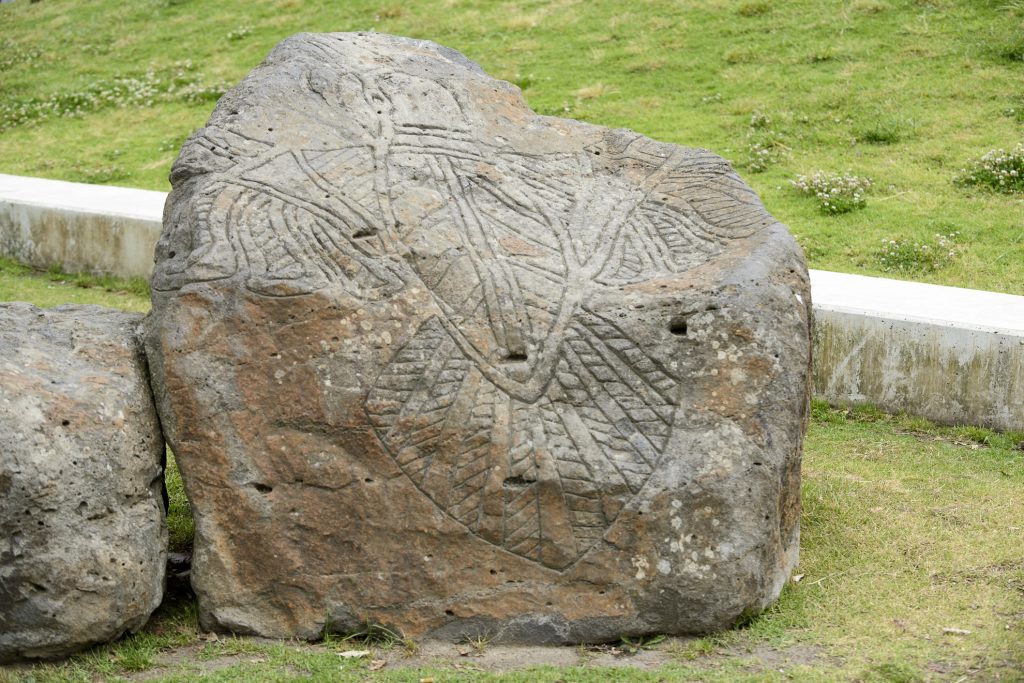 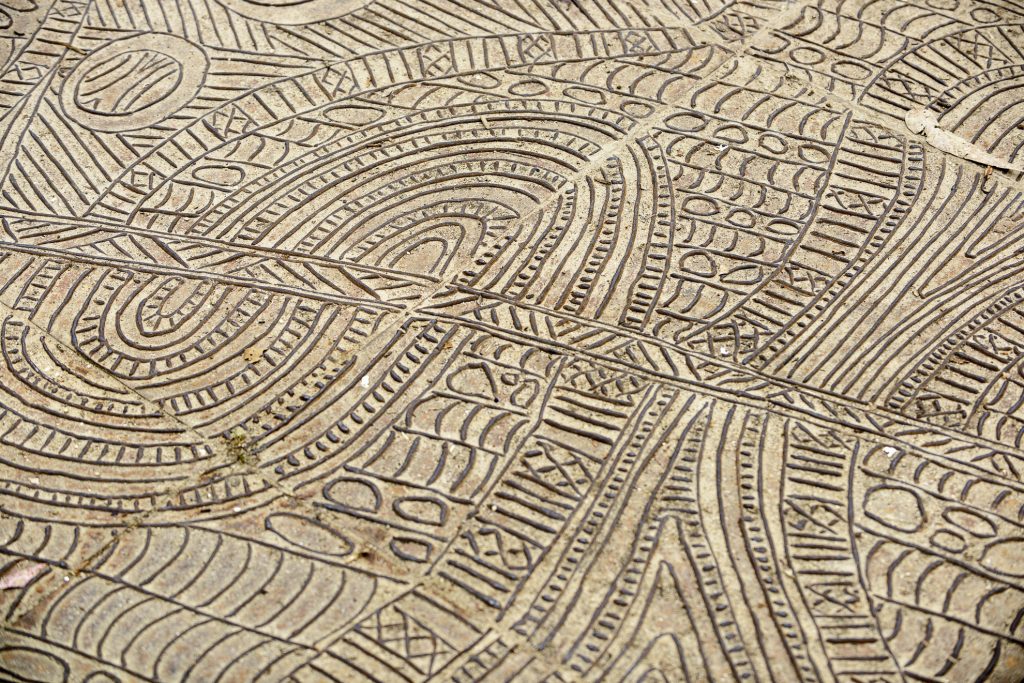 Location: ArtPlay, Birrarung Marr 'Birrarung Wilam' – meaning river camp – is an environmental art project made up of several interrelated elements that celebrate the physical and spiritual connections between Indigenous people and place. The philosophy underlying the work is gulpa ngawul, a Yorta Yorta word that most closely translates as ‘deep listening’. Accordingly, this work by Indigenous artists Vicki Couzens (Kirrae Wurrong/Gunditjmara), Lee Darroch (Yorta Yorta, Mutti Mutti and Trawlwoolway) and Treahna Hamm (Yorta Yorta) honours the traditions of tribes throughout Victoria, particularly those of the Wurundjeri and Boonwurrung, on whose country the city and greater Melbourne is located. Birrarung Wilam listens to and commemorates cultural knowledge, stories and practices, revitalising them through the reinterpretation of tradition and the site. The central component of the work is the mound campsite, or puulwuurn, supported by an eel pathway, two message sticks, five shields, a group of ancestor stones, interpretative panels, water vessels and an audio installation. The mound campsite is a contemporary recreation of a sitting place, an element central to Aboriginal cultural life; significant artefacts from Aboriginal groups from around Victoria have been interred within the mound. The carved hardwood message sticks stand at the site’s eastern and western ends, representing the Wurundjeri/Woiwurrung and Boonwurrung people, respectively, and welcoming visitors onto the site in a gesture of reconciliation. The eel path refers to a primary food source, trapped as they were near the shallow waterfalls that once separated the freshwater river from the salty bay water, not far from this site. The five large metal shields along the riverfront stand in complementary opposition to the feminine form of the mound campsite. On the southern side of the ArtPlay building, etched-metal panels, resembling possum-skin cloaks, interpret each element of 'Birrarung Wilam' and are augmented by a sound installation of Indigenous voices. The large, carved ancestor stones are placed to form a semi-circular performance area, a place where ceremonial and cultural practices can continue to keep the connection to land vibrant.