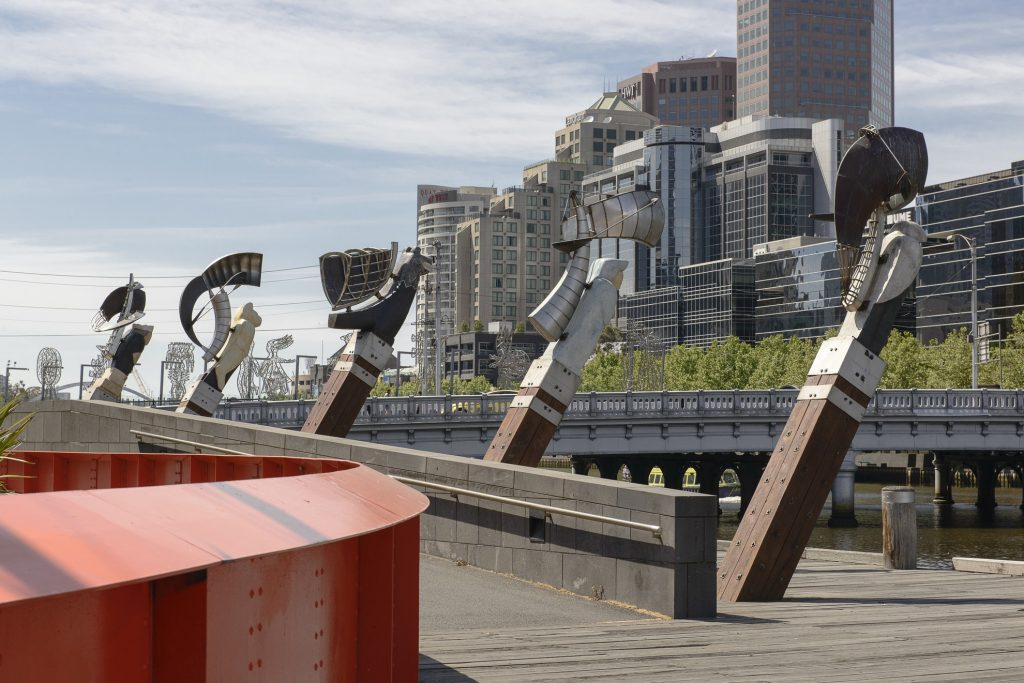 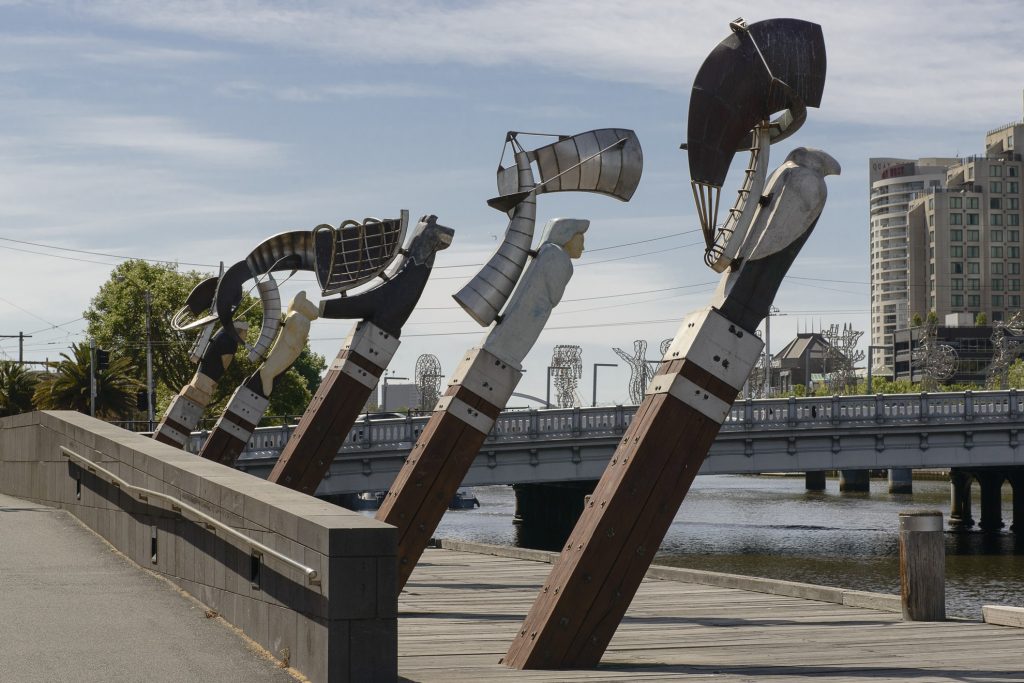 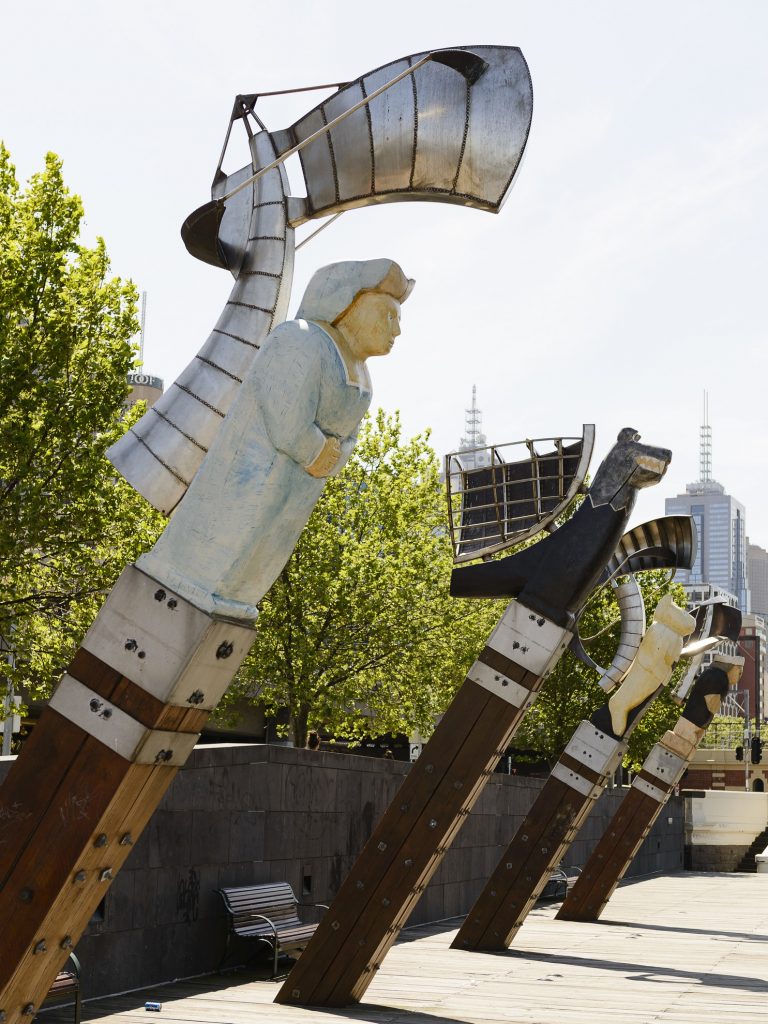 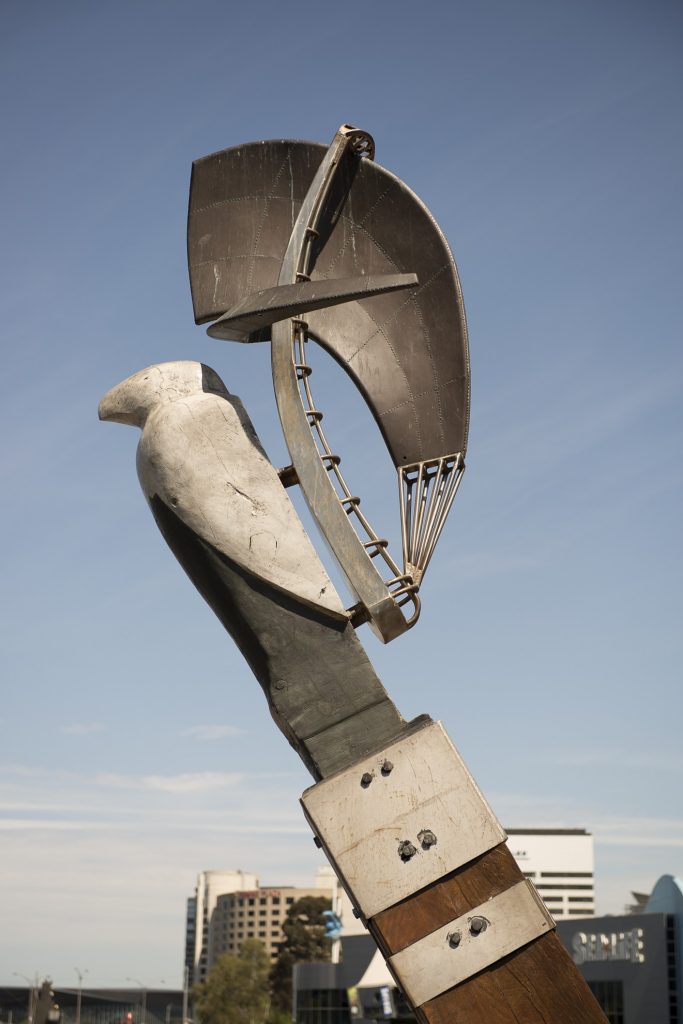 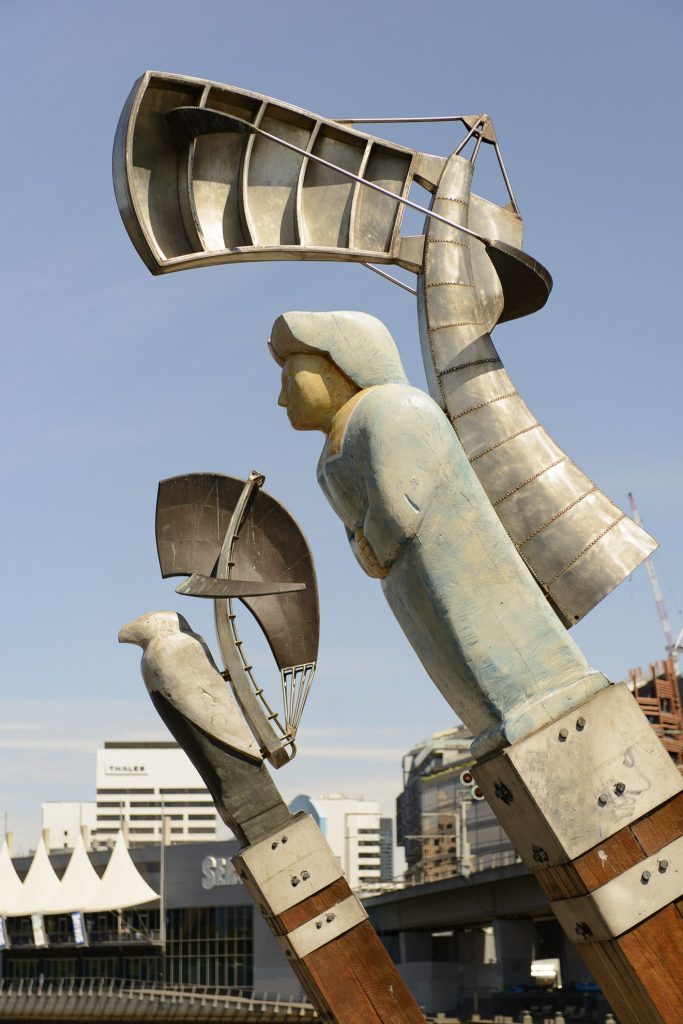 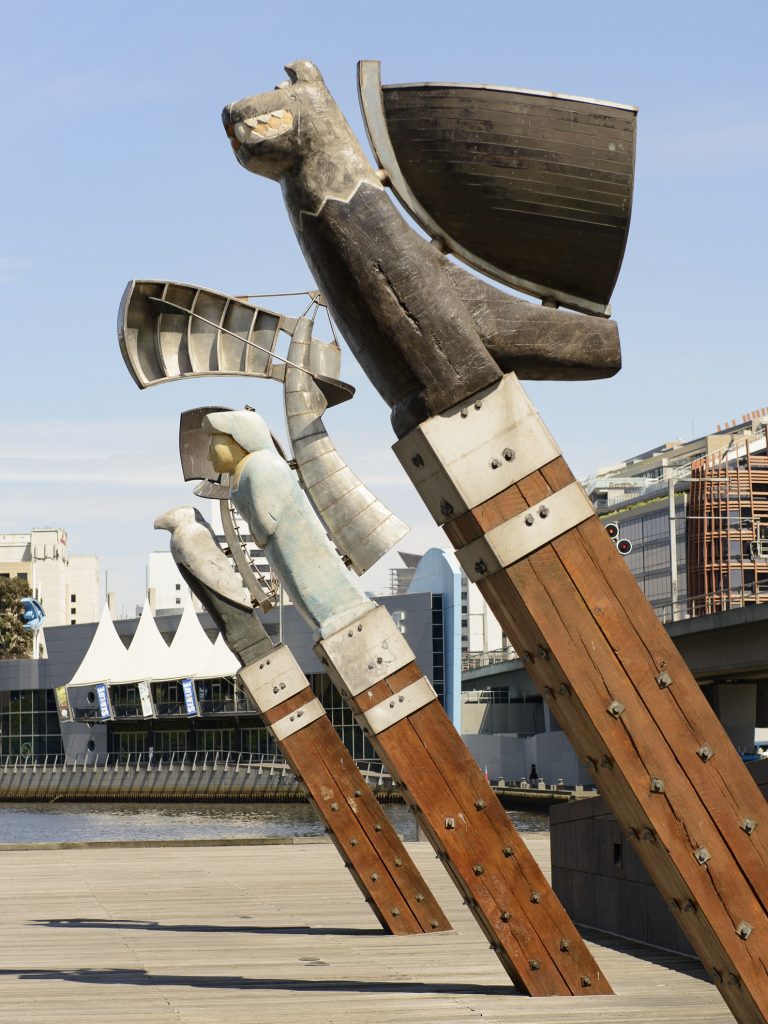 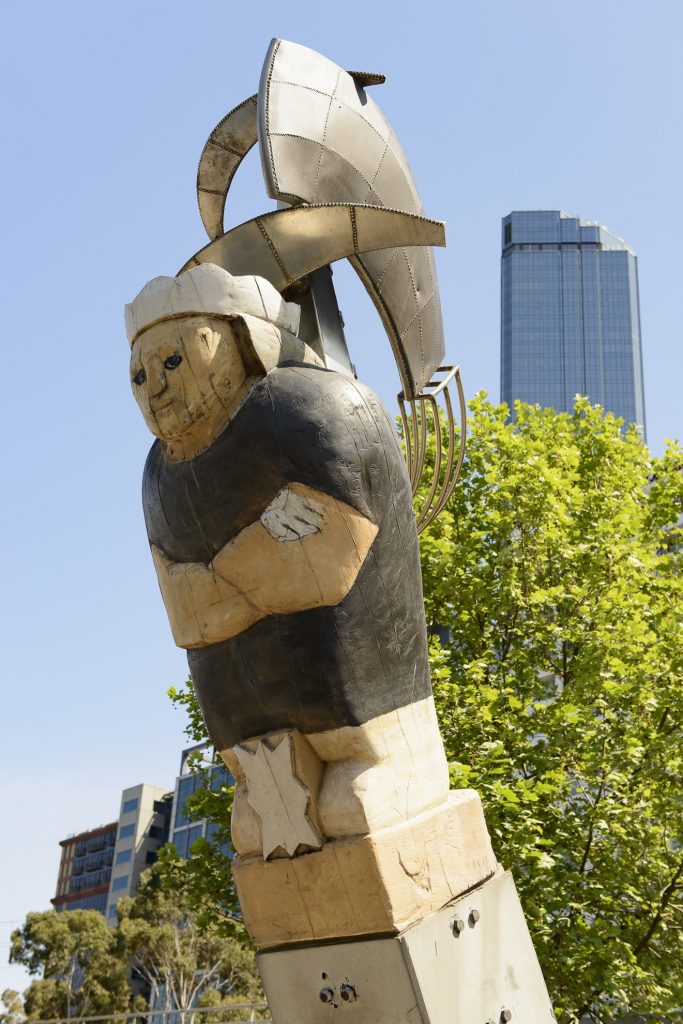 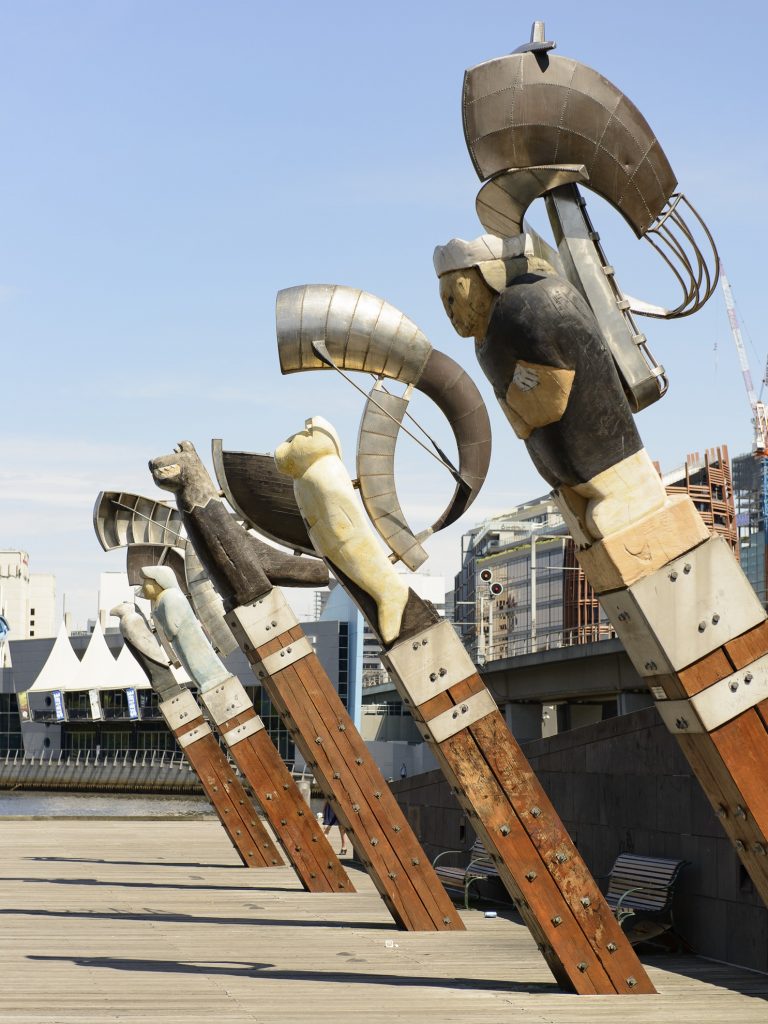 Location: Enterprize Wharf, Yarra River During the 19th century, the Yarra River near the corner of Queen and Flinders Streets was the focus of Melbourne’s shipping activity. Natural falls in the river created a barrier between the salt and freshwater, and just below the falls a natural widening in the river enabled boats to turn around after unloading at Customs House (now the Immigration Museum). In 1996, the Yarra Turning Basin Project was launched. This would recreate the historic turning basin, which had since been filled in, and develop a new riverside promenade that would complement and extend the existing spatial design of the river’s northern bank. The concept for the site’s public artwork entailed a series of five figureheads, which would sit on wooden piers that were integral to the design and material of the timber wharf. Council’s Public Art & Acquisitions Committee selected Bruce Armstrong and Geoffrey Bartlett’s design from a short-list of four. Both Armstrong and Bartlett are renowned Melbourne sculptors, each having undertaken many public commissions and having exhibited widely. With the working title ‘5 figureheads’, they crafted Constellation from wood and metal, and using traditional and contemporary approaches to the sculpture’s design. The five carved-wood figureheads represent a dragon, woman, bird, man and lion. These evoke a long history of figurehead carving from around the world and also reflect the ethnic and cultural diversity of those who used the turning basin during the early years of settlement. The constructed metal elements suggest maritime forms, lines and images, but they are never simply literal; they require the viewer to engage with the work to read their reference point. The title of this work, too, pays homage to the long history of seafaring, the stars having guided many a vessel from one port to another. Constellation was unveiled in 1997.