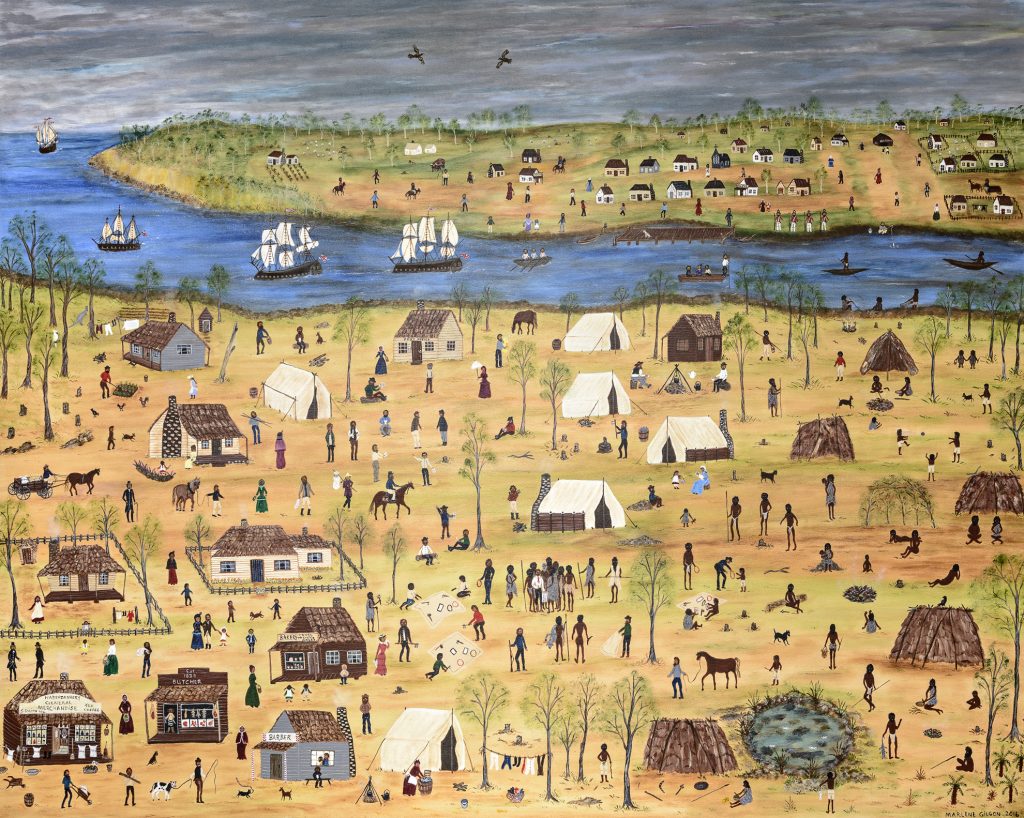 Signed by the artist lower right

Purchased, 2017
City of Melbourne Art and Heritage Collection
© Courtesy of the artist

Wadawurrung Elder Aunty Marlene Gilson was born in Warrnambool, Victoria. She began painting in 2012, creating detailed and compelling history paintings grounded in the Wadawurrung past, the stories of which she learnt from her grandmother. Rendered in naïve style and a colourful palette, her paintings may initially seem charming and unassuming, but on closer inspection they reveal Gilson to be a sophisticated reader of historical events. In contrast to the accepted narratives of early colonial history, her Aboriginal perspective brings a unique and nuanced understanding to her visual accounts of the lived past. The City of Melbourne purchased ‘Land Lost, Land Stolen, Treaty’ in 2017 recounts the successive invasion of Kulin lands. In the ships of strangers, colonial buildings, fenced plots and negotiation of a spurious ‘treaty’ dispossession is writ large. Yet Gilson does not depict a wholly downtrodden or absent Indigenous people; she shows intersecting stories, with a thriving Aboriginal community that is adaptive, expressing strength of culture and connection to country. Bunjil flies overhead and Waa, the crow, sits sentry-like atop a mia mia at the bottom left of the scene. These totems of the artist not only draw this historical scene into a greater narrative of time and being, but confirm culture through signalling a vital belief system and moiety structure. This painting was first shown in the ‘Sovereignty’ exhibition, held at the Australian Centre for Contemporary Art, Melbourne, from December 2016 to March 2017, after which it came into the Art and Heritage Collection. It has since been loaned for exhibition at the 21st Biennale of Sydney, held March to June 2018.