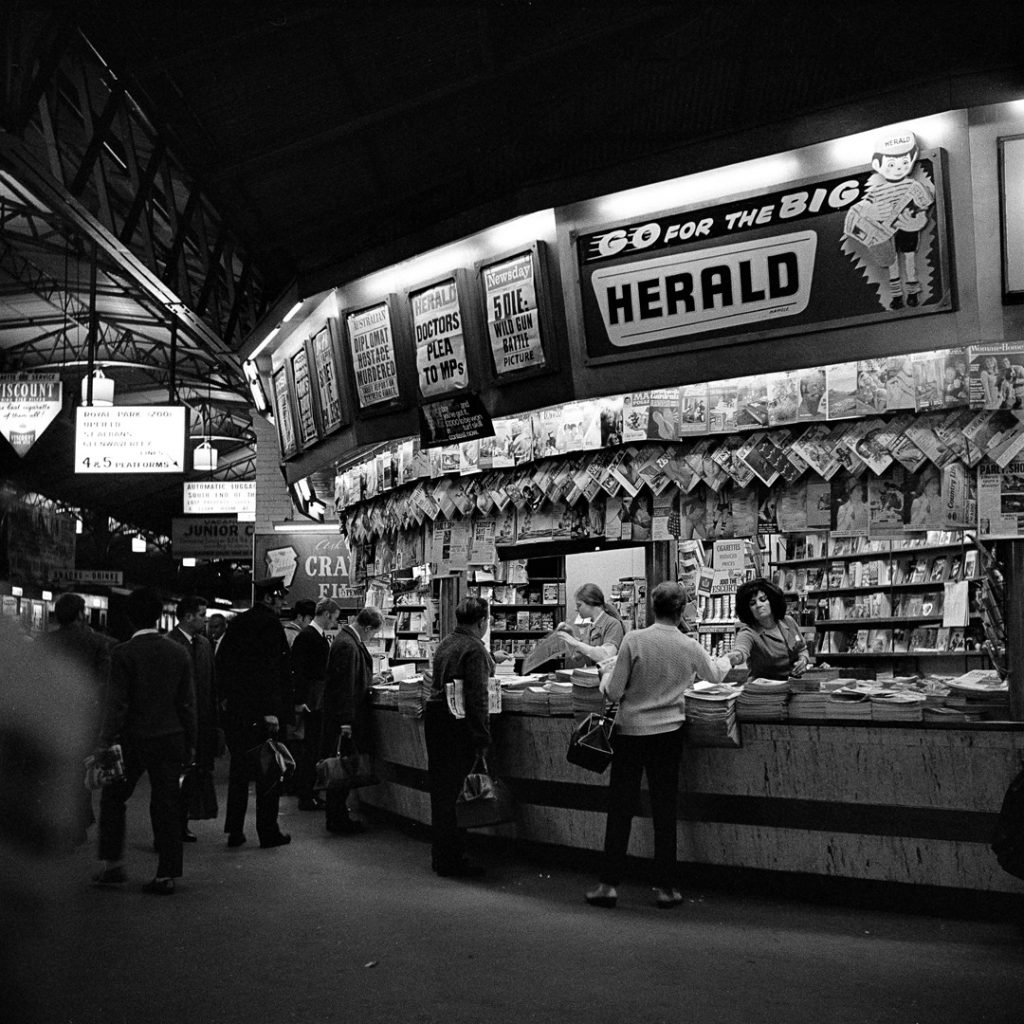 Black-and-white photograph of a large news stand at Flinders Street Station You could say that Angus O'Callaghan's very early Melbourne life was a series of encounters with photography. But between 1968 and 1971, and in his 40s, he took to photography with greater intensity, though still with the self-critical eye of his youth. The work he produced in this period was prompted by his desire to leave his career as a high-school teacher in order to go professional. Across these years, he walked Melbourne on evenings and weekends, photographing its architecture, its streets, its football crowds, its children at the Royal Melbourne Show, its hippies at Moomba, its arcades and backyards, its new immigrants, its milk bars and its youths. O'Callaghan shot on Yashicaflex medium-format cameras, the choice of professionals. He travelled light, with just his two cameras and some film, shooting in both black and white and colour. There were no extra lenses and rarely a tripod. Tall and steady, he could hold the camera on his chest, look down into the lens and shoot without taking much time or intruding on his subjects. O'Callaghan is strongly formalist, his images carefully composed within the square frames of his chosen format. Looking at his photographs now (aged in his 90s), he lingers at their 'edges', blocking out parts of his images to explain the importance of the whole. In several, the photograph's frame is doubled by an interior frame, at the entrance to Flinders Street Station and along the rim of the National Gallery of Victoria's water wall, for instance. As he says, 'a frame makes things feel important'. The mid-century was the era of photographic coffee-table publications, with works taken by prominent immigrant photographers such as Henry Talbot, Wolfgang Sievers and Mark Strizic. But O'Callaghan's best work stands apart from theirs in its mood and approach; it seeks a certain intimacy and sense of youthfulness in its engagement with the contemporary realm. Most of O'Callaghan's works in the Art and Heritage Collection were purchased for 'At Dusk, Under the Clocks', an exhibition held at City Gallery during February–April 2015. They depict the city in low light: at dusk, in winter and on neon-filled nights, and in the vicinity of Flinders Street Station, with its well-known meeting place under its clocks. They inhabit the southern edge of the Hoddle grid, crossing the Yarra to the National Gallery of Victoria via Princes Bridge. This small slice of O'Callaghan's photographic output stands together in its iconic locations, its cinematic mood and its strong feeling for the newly 'modern' city. This text is drawn from the exhibition catalogue, written by curator Kyla McFarlane.