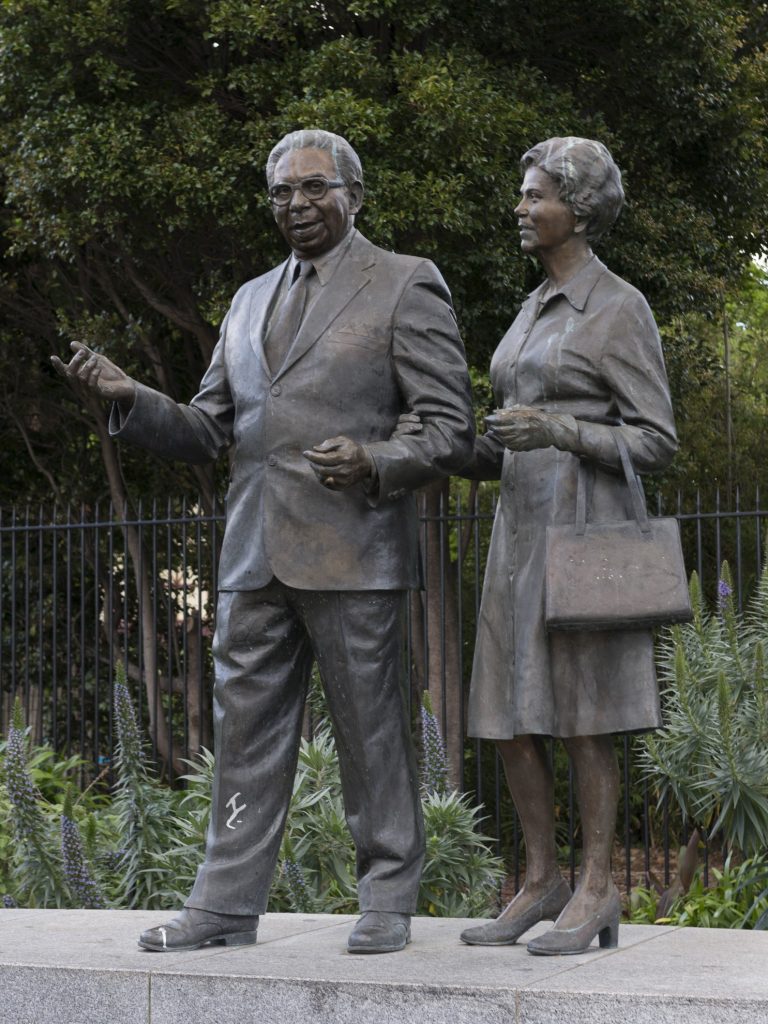 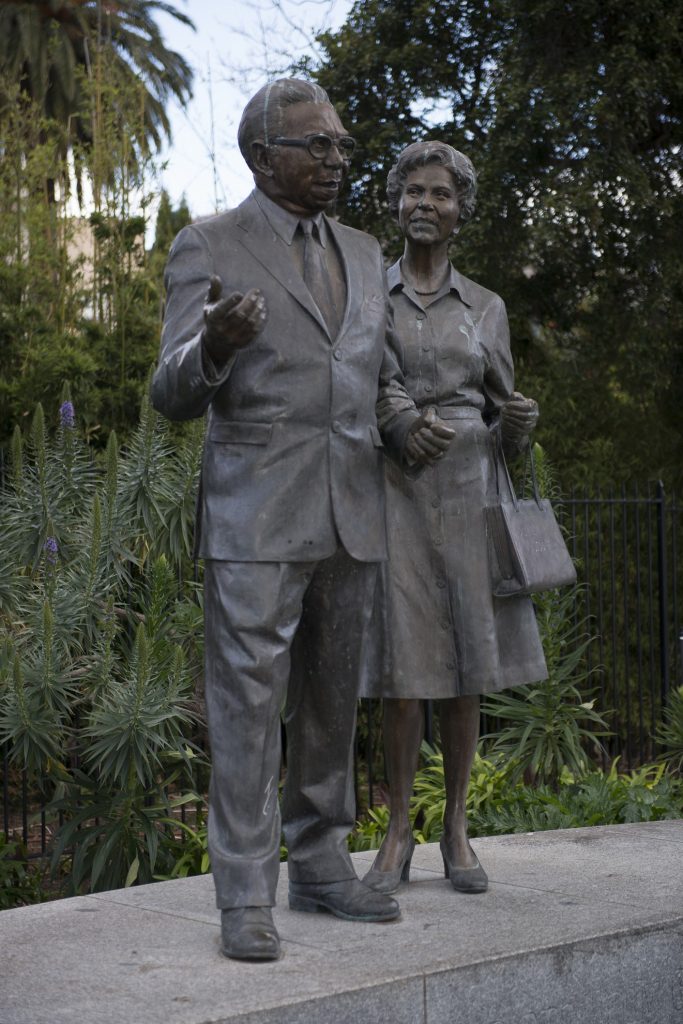 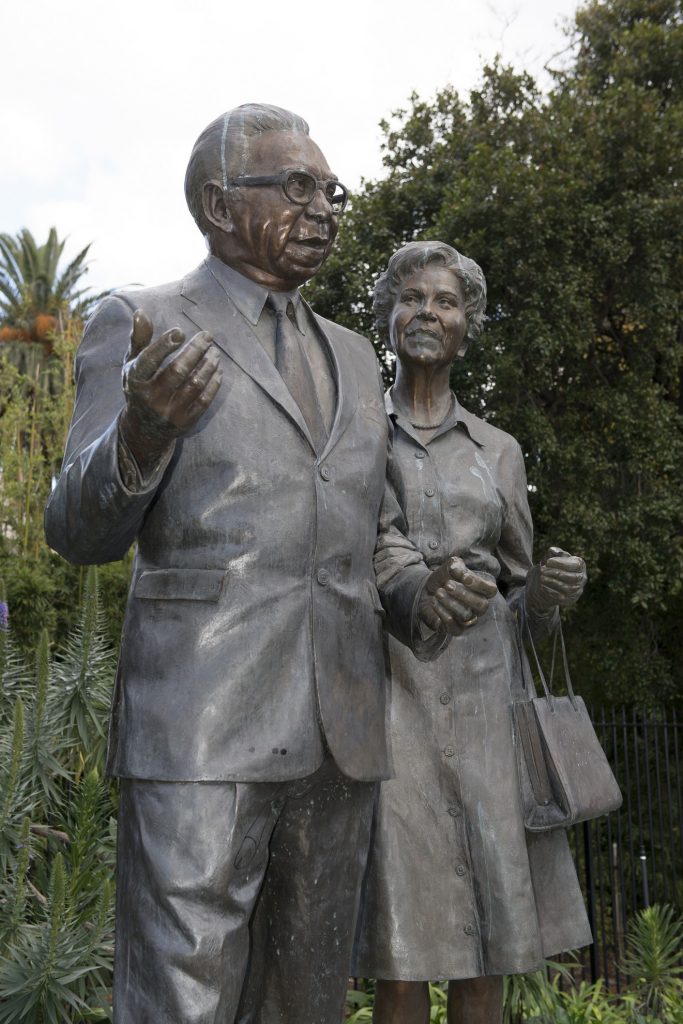 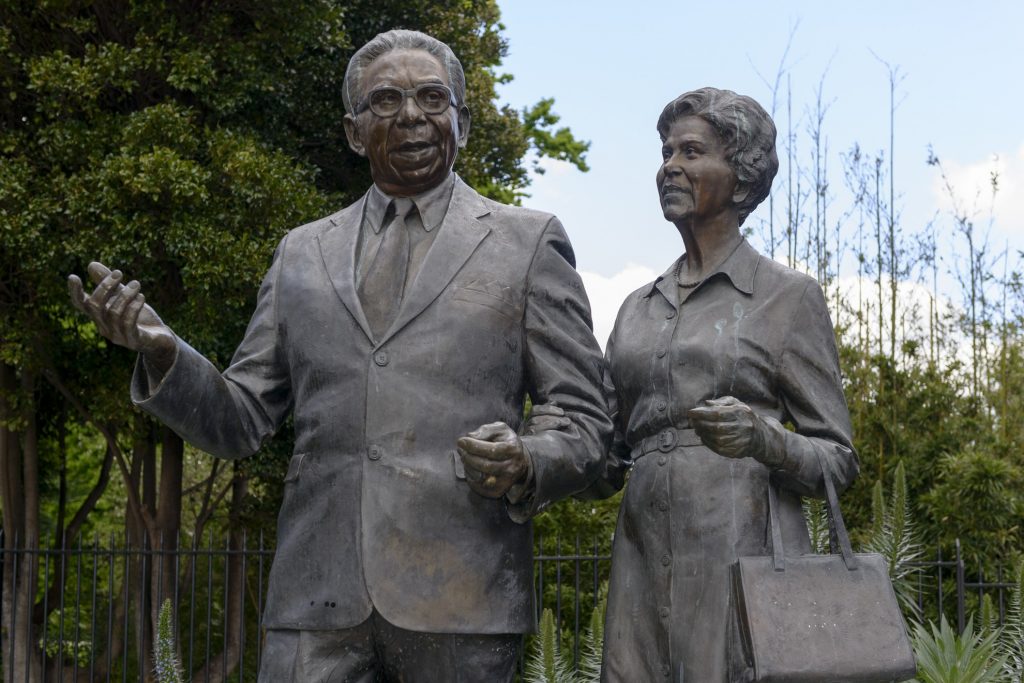 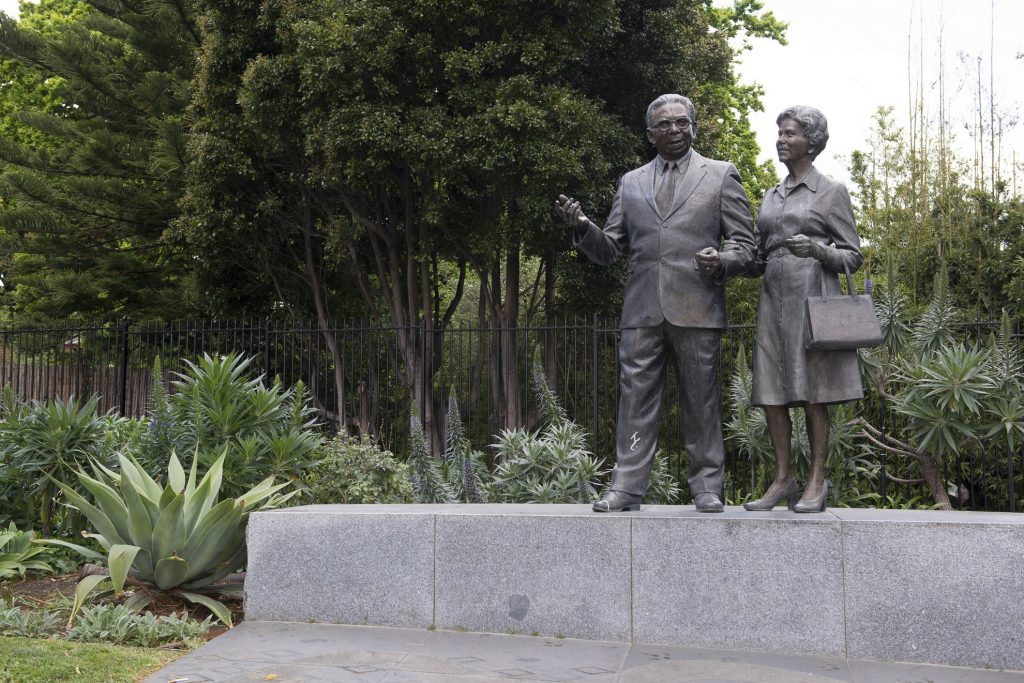 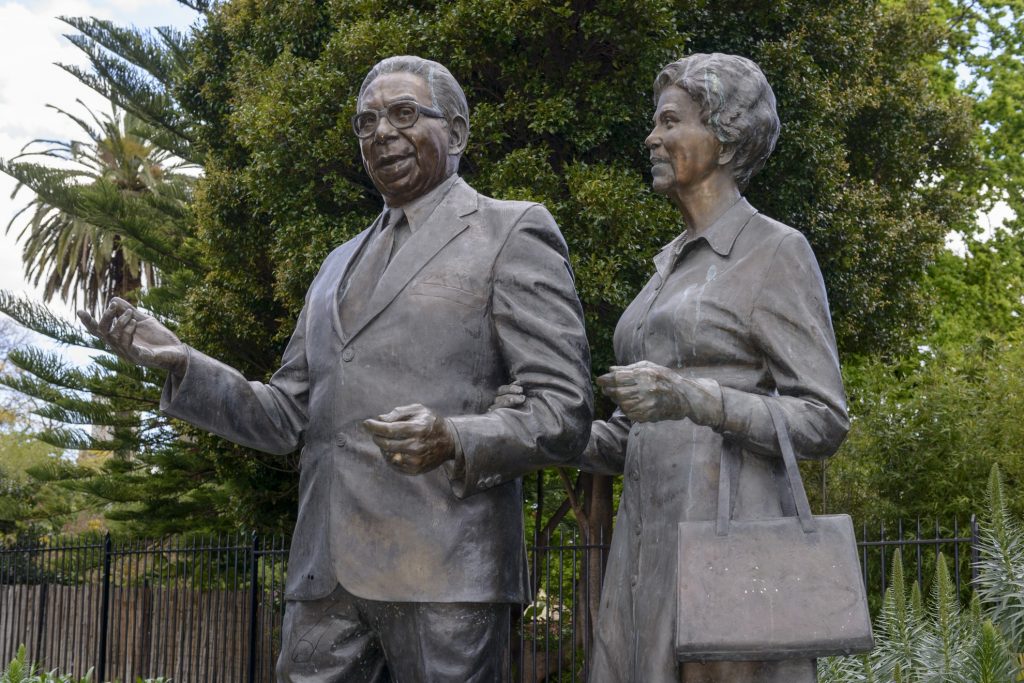 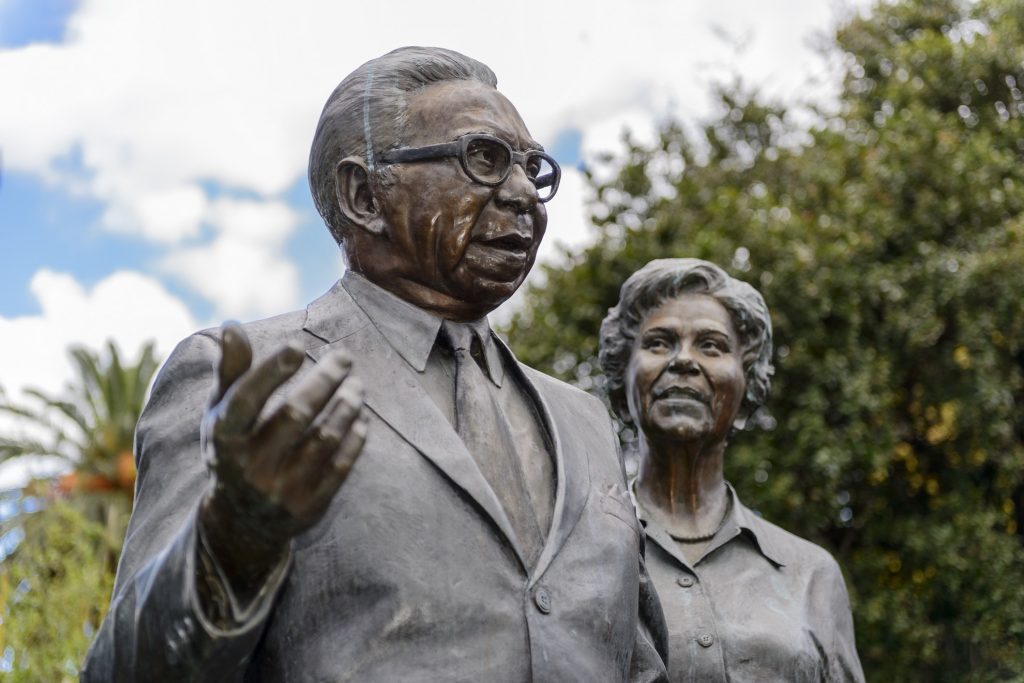 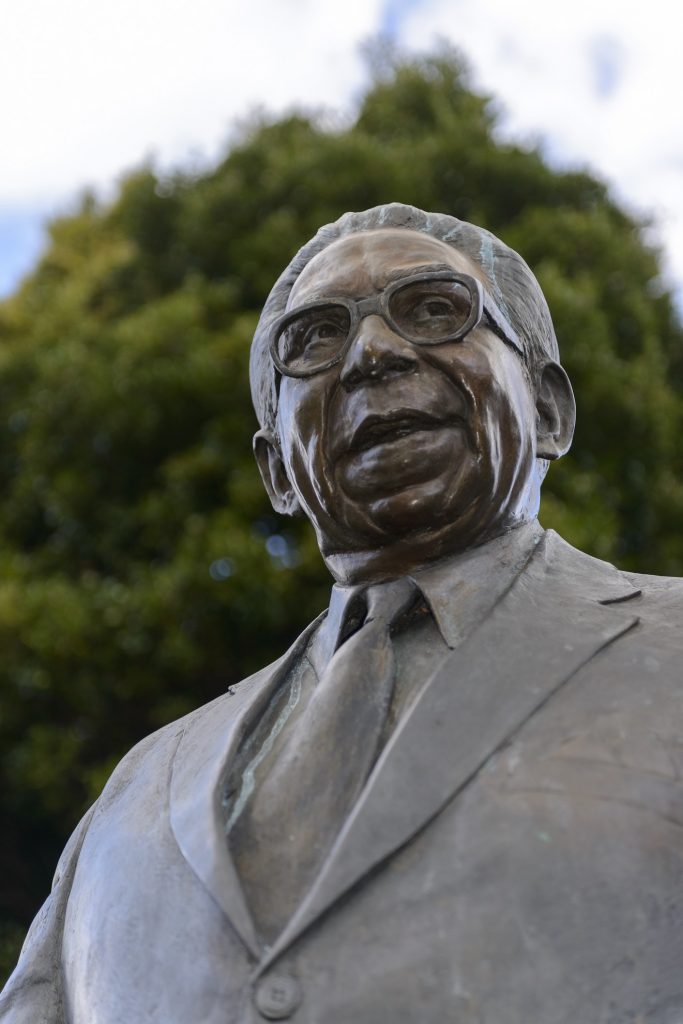 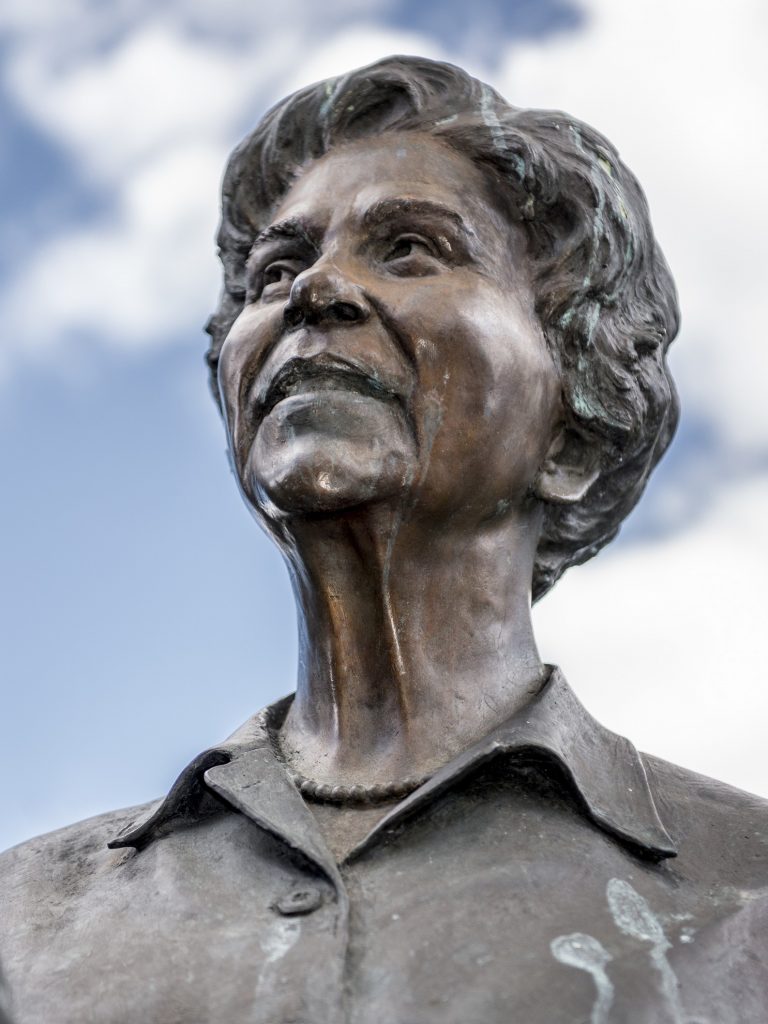 Location: Parliament Reserve, Spring Street Bronze memorial statue of Pastor Sir Doug Nicholls and Lady Gladys Nicholls Sculptor Louis Laumen’s intention with these life-size bronze figures was to create a literal representation of his subjects’ place in public life, acknowledging them as great catalysts for social change. Sir Doug steps forward in conversation and Lady Gladys stands with him. In the bluestone paving below, Ngarra Murray’s etching incorporates the totems Bigarrumdja the Emu and Waa the Crow with diamond-shaped markings. These traditional symbols mark her great-grandparents’ connection to country. The position of the statue is significant, located between the two key locales of Sir Doug's work, Fitzroy and state parliament. Sir Doug Nicholls was the pastor of Australia’s first Aboriginal Church of Christ, in Fitzroy, and in 1957 became a field officer for the Aboriginal Advancement League. His commitment to Indigenous welfare made him a natural representative for Aboriginal people, and he was awarded a MBE for his efforts in 1957. He worked as a lay preacher at the Gore Street Mission Centre from 1935, but he really began working with disadvantaged Aboriginal people in the early 1940s through the Aboriginal Advancement League. In 1968, he was awarded an OBE for his work and became a member of the new Victorian Ministry of Aboriginal Affairs. In 1972, he was the first Aboriginal person to be knighted, and four years later he became the governor of South Australia. Like her husband, Gladys Nicholls was born at Cummeragunga Aboriginal Station in New South Wales. After the death of her first husband, Howard Nicholls, in 1942, Gladys married his brother Doug. She was committed to working towards the welfare of the underprivileged, as well as for the rights of women. Gladys was a charity worker and fundraiser, and among other achievements became secretary of the National Aboriginal and Torres Strait Islander Women’s Council and the Victorian state president in the 1970s. Together they were prominent campaigners for Indigenous rights and justice, and this memorial statue, first proposed by the Department of Justice and keenly supported by the Nicholls’ family, recognises this. It is the first memorial sculpture in Melbourne dedicated to Aboriginal leaders, and its presence strengthens the visibility of Indigenous people and cultural diversity in Melbourne.