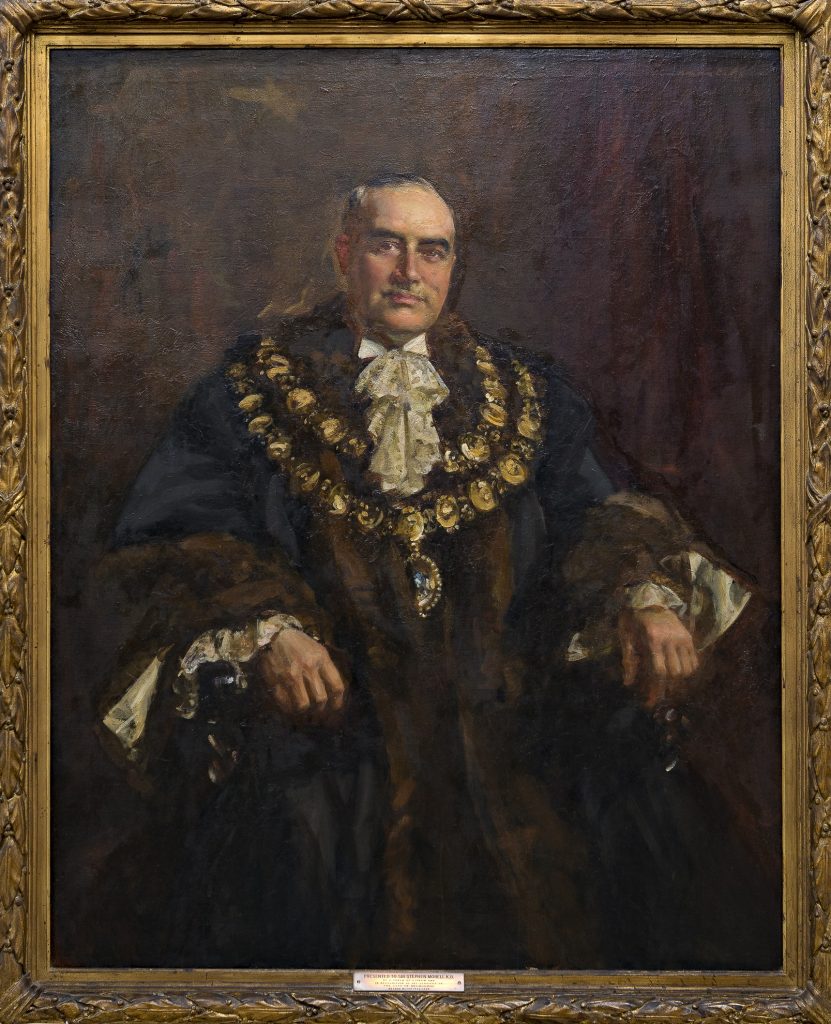 This portrait shows Sir Stephen Joseph Morell (1869-1944), who held the office of Melbourne lord mayor from 1926 to 1928. The son of Spanish migrant Estaban Morell and his Australian-born wife, Ada, he spent several years of his childhood in Spain, to which he was also honorary consul in the early 1930s. Stephen Morell first became a city councillor in 1901, representing the Gipps Ward, north of the city. He held this position until 1939, serving on seven council committees over those years. Following his first term as lord mayor, Morell was unanimously elected for a second; while he was offered a third term, he declined. As lord mayor, he entertained the Duke and Duchess of York during the Melbourne leg of their 1927 visit, with Morell knighted that same year. Issues that vexed his tenure were those of the bridges crossing the Yarra and the work of the Metropolitan Town Planning Commission. Estaban Morell had been a hotelier, and the son followed in his father's footsteps, owning, among other city establishments, the Oriental Hotel and the Princes Bridge Hotel, the latter becoming Young and Jackson's. At heart a businessman as much as a publican, Morell was chairman Melbourne Co-operative Brewery; a board member of Carlton and United Breweries (which absorbed the co-operative in 1925) and the Metropolitan Tramways; and a director of Windsor Pictures, the Victoria Insurance Co. and the Equity Trustees, Executors & Agency Co. This formal half-length composition by John Longstaff (1861-1941) was painted in the final year Morell's tenure as lord mayor. Its dark, rich colours, low perspective and the ceremonial robes and chains together convey the imprimatur of masculine authority. Hailing from country Victoria, Longstaff was schooled in painting at the National Gallery art school in Melbourne during 1883-87, before training further in Paris. He then settled in England, where he gained much recognition for his skill in academic-style portraiture, even painting King Edward VII and Queen Alexandra in 1904. During the final year of the Great War, Longstaff became the official war artist for the Australian Imperial Force, after which he returned to Melbourne. The five-time Archibald Prize-winner remained faithful to the influences of French salons and the academy, and the high regard in which he was held as an accomplished portraitist ensured he was in great demand in his home country.