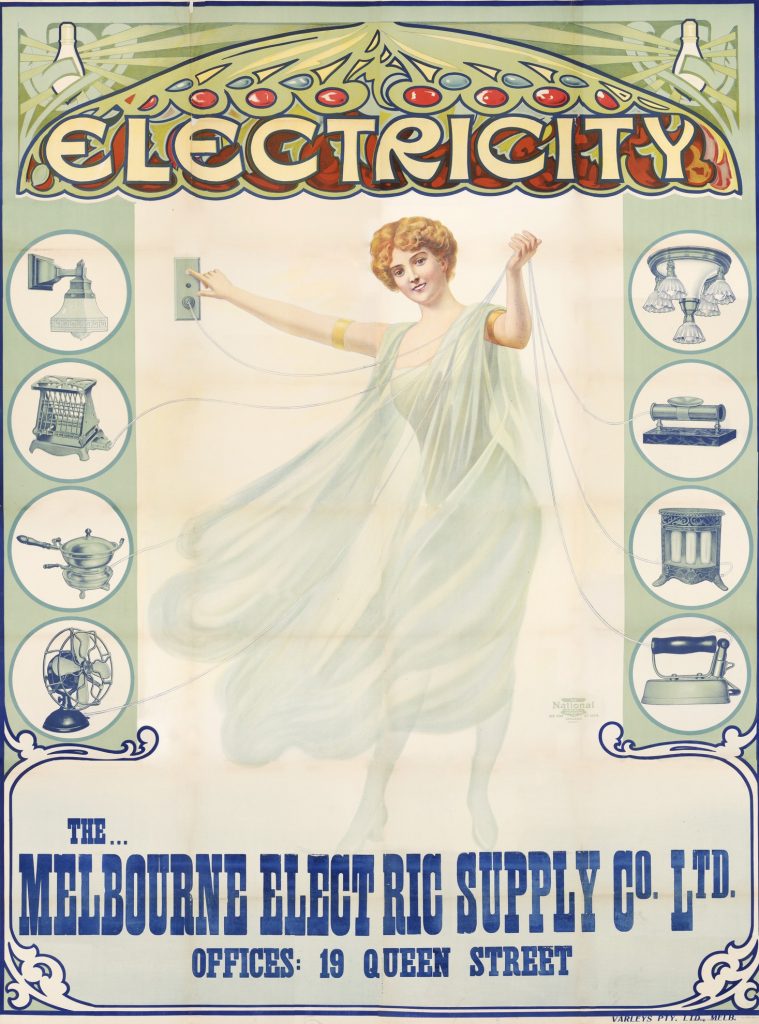 This eight-sheet advertising poster depicts a woman at its centre. On either side of her are electrical appliances on a pale-green background. The top has the text 'ELECTRICITY', under which is an art nouveau design; the bottom panels contain text that has been overprinted by Varleys in a nouveau border. Until 1896 the supply of electricity in Victoria was entirely unregulated; thereafter, Melbourne City Council supplied the central city. The Melbourne Electric Supply Co. Ltd was the major supplier to the suburbs. Between 1910 and 1932, its head office was at 19 Queen Street, Melbourne. This poster appears to have been purchased as a ‘ready-made’ lithograph from the USA, where the consumption of electricity was well in advance of Australia’s. Although this poster and another one held by the City of Melbourne are similar in composition, the art nouveau influence in ‘Electric Girl’ (see bottom right corner) distinguishes it from ‘Electric Fixtures’, which features a more the domestic figure at an ironing board. The subsequent application of the Melbourne-related information in both posters, including the printer’s name, appears to have been screen printed. Exactly where and how these posters were used is unknown, although their size suggests they were intended as billboard advertisements. Brothers Thomas and Charles Varley provided printing, lithography, engraving and stationery services in Melbourne. Trading as Varley Brothers, they were in business from at least 1898 until 1925 when the firm went into voluntary liquidation. Varley Brothers was widely respected and attracted many fine craftsmen, particularly in their formative years. The business had up to 40 printing machines and was located at 326–28 Flinders Lane.