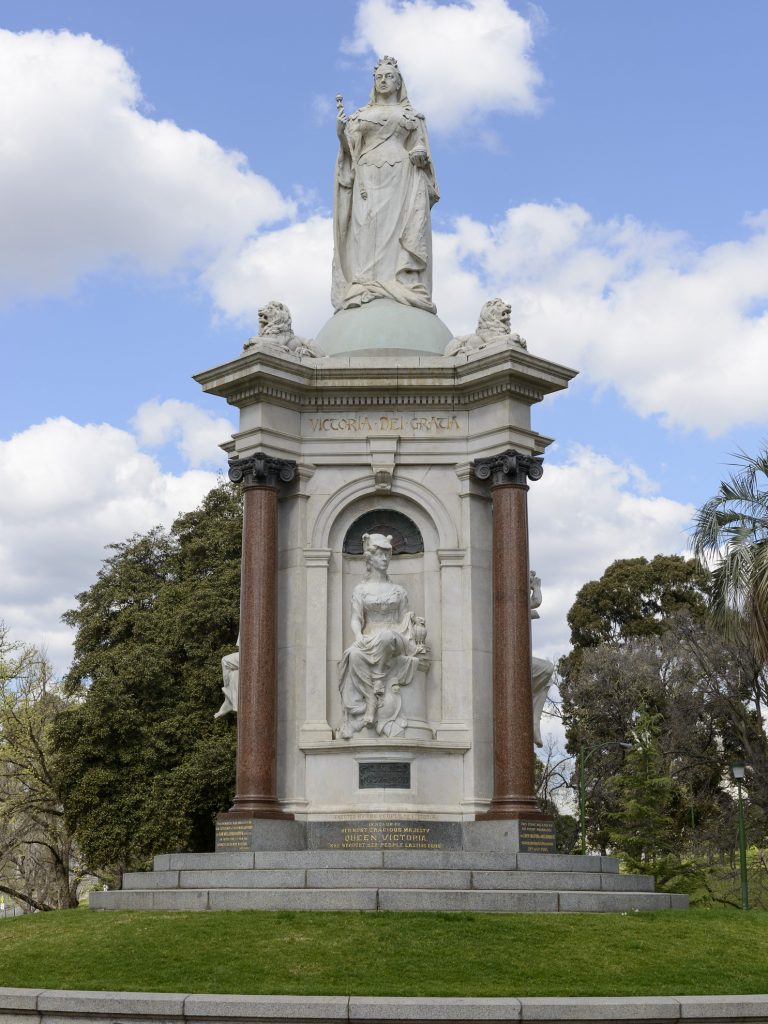 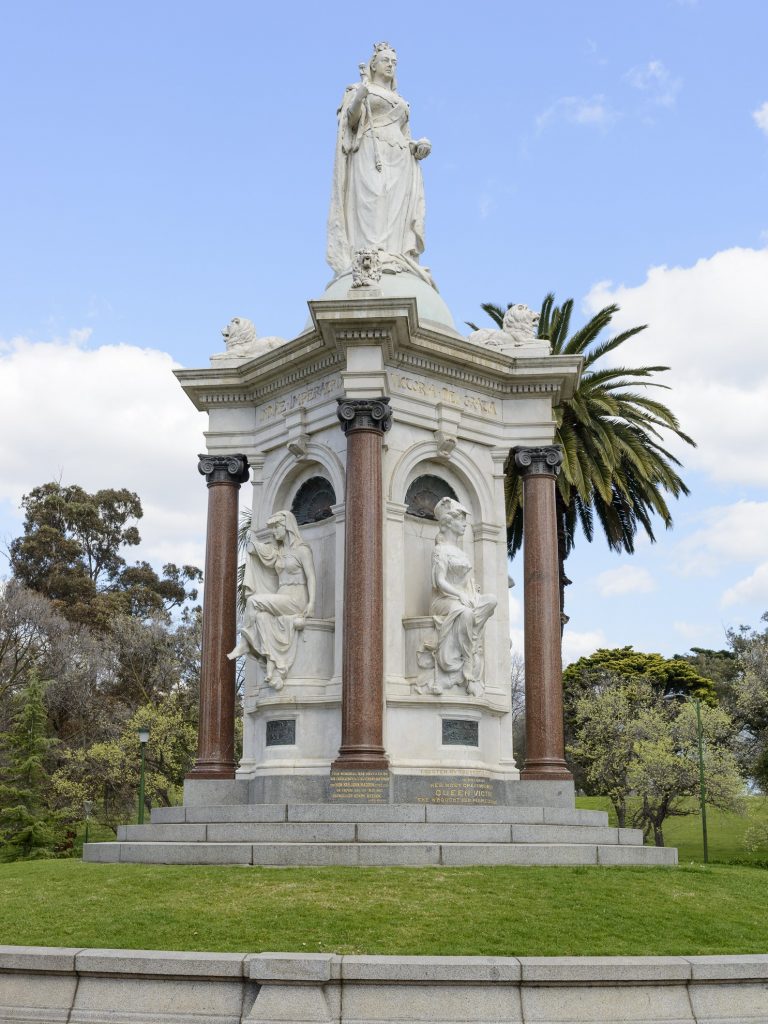 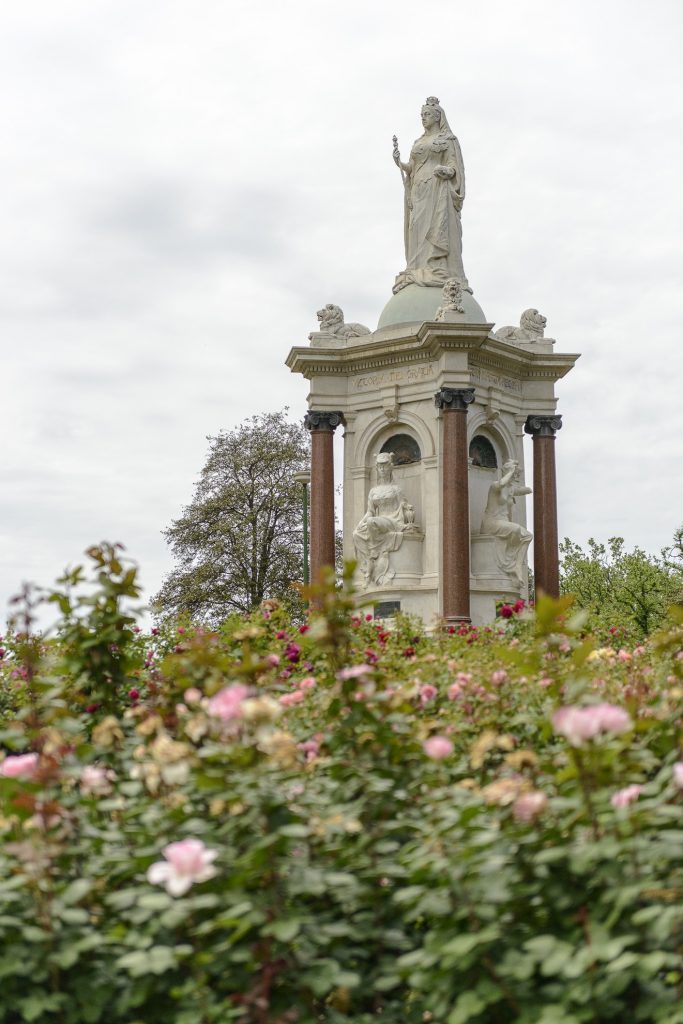 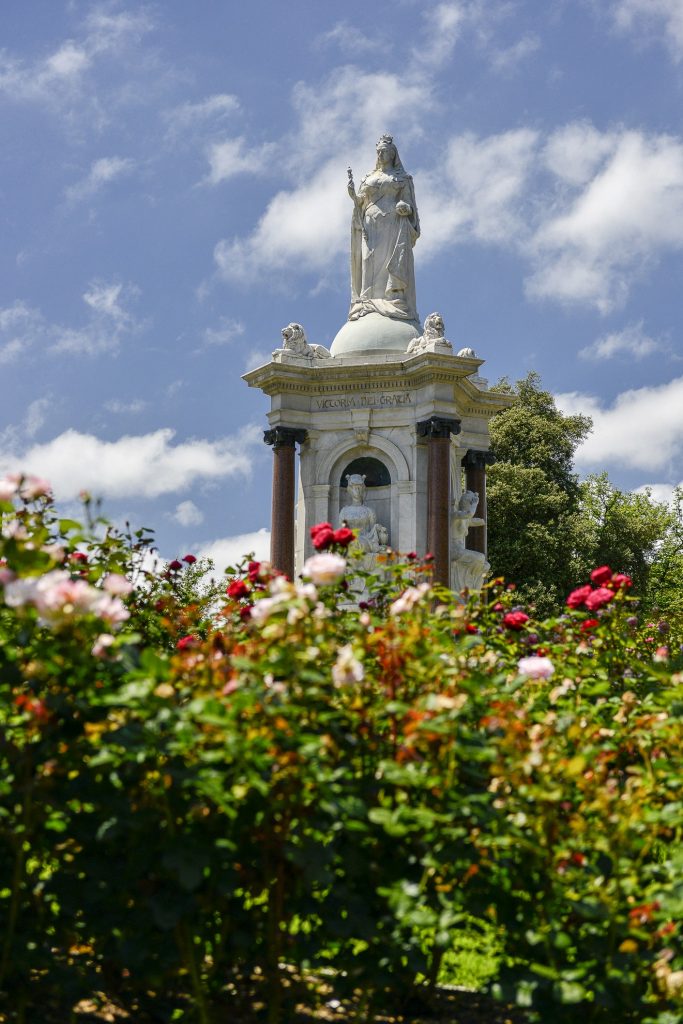 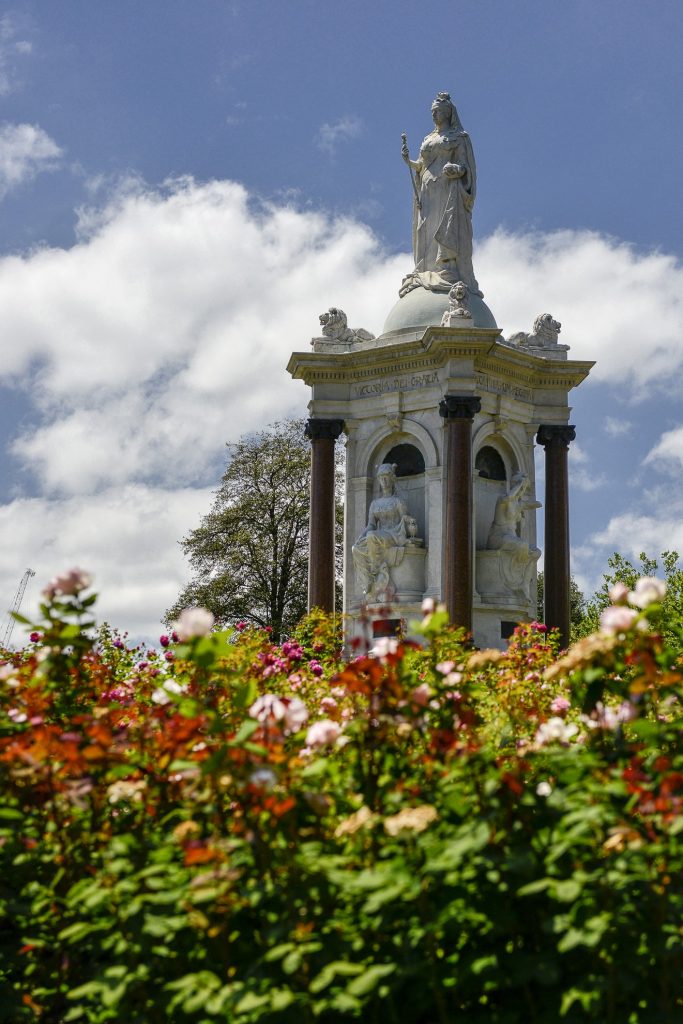 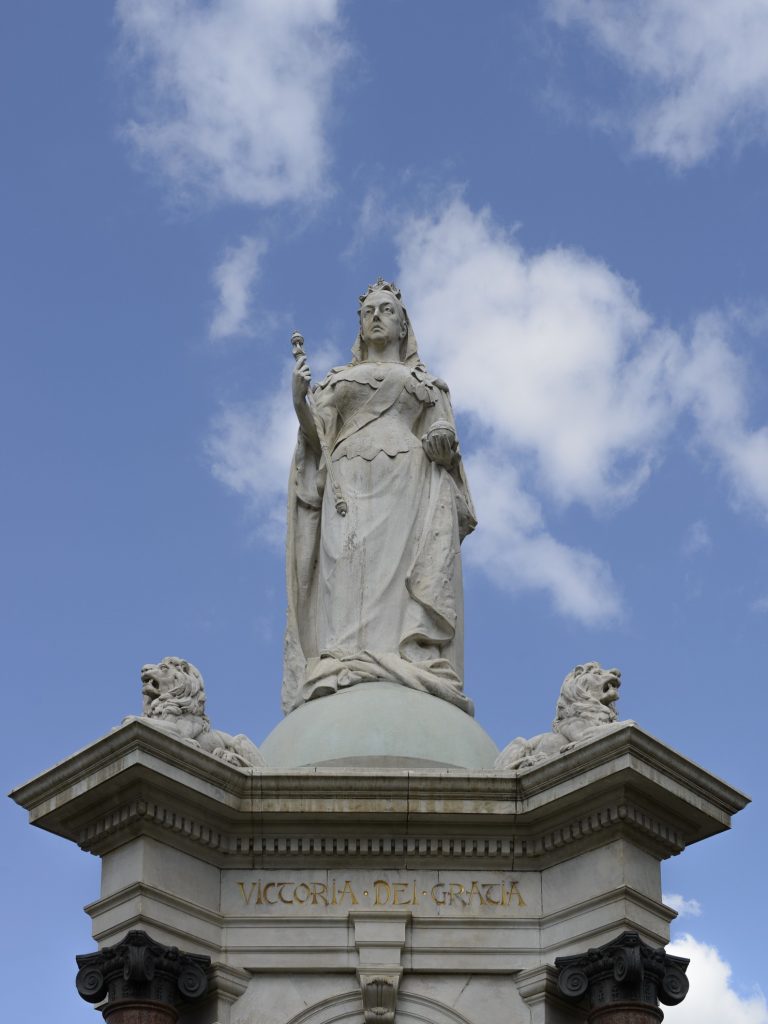 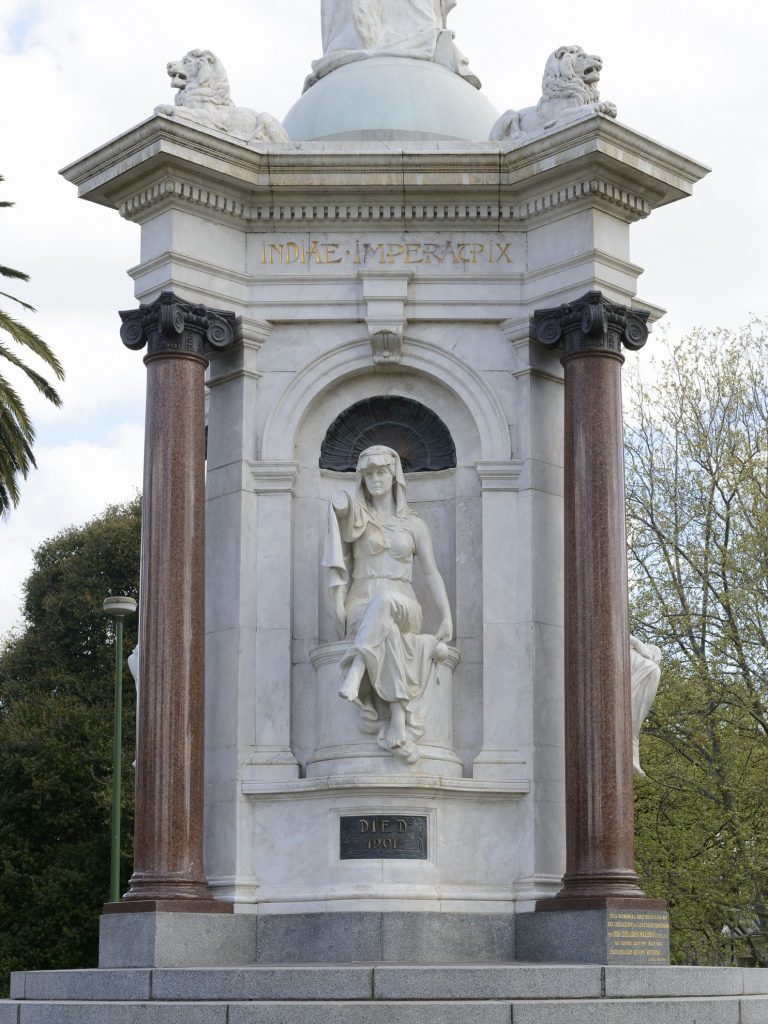 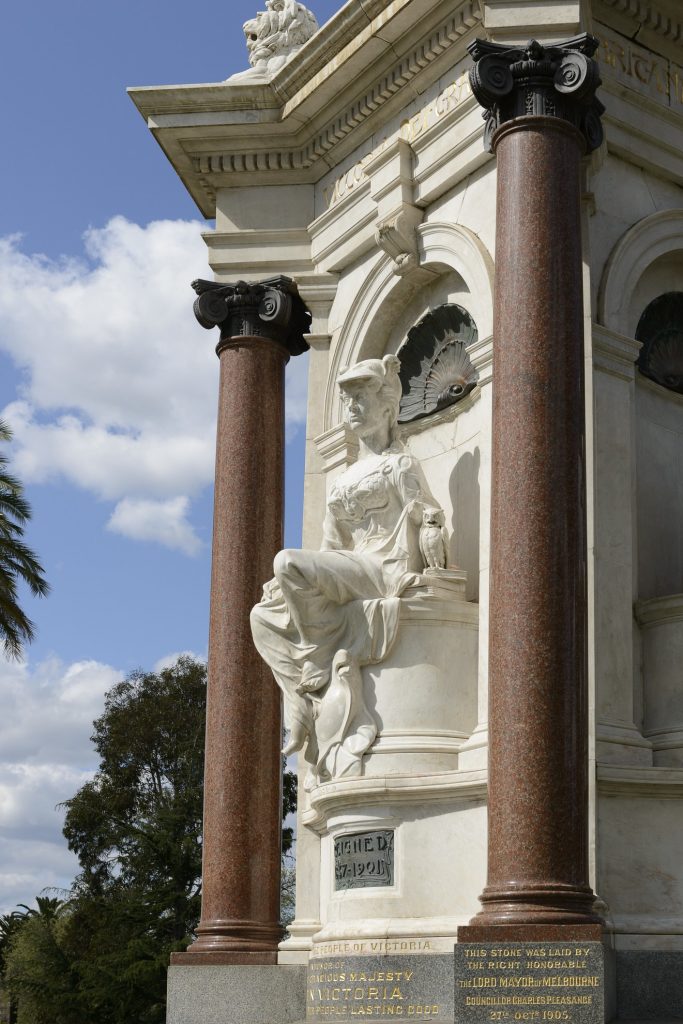 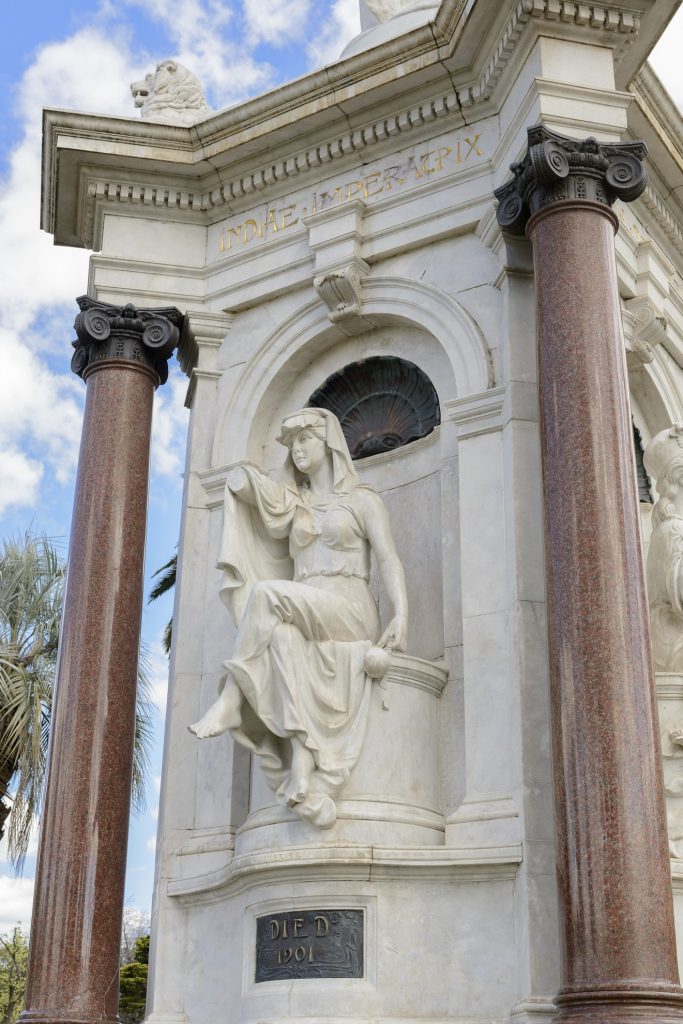 THIS STONE WAS LAID BY / THE RIGHT HONOURABLE THE LORD MAYOR OF MELBOURNE, / COUNCILLOR CHARLES PLEASANCE / 27TH OCTOBER, 1905 / THIS MEMORIAL WAS UNVEILED BY / HIS EXCELLENCY THE LIEUTENANT-GOVERNOR / THE HONOURABLE SIR JOHN MADDEN, G.C.M.G., L.L.D., / ON EMPIRE DAY,

Location: Queen Victoria Gardens The memorial consists of a Statue of Her Majesty surmounting a globe resting upon a pedestal of emblematic design. Three steps at base of memorial, and the plinth upon which the granite columns and superstructure rest, are of grey Harcourt granite The four columns supporting the marble entablature are of Swedish red granite, surmounted by bronze Ionic capitals. From the plinth to the dome upon which the statue stands, the architectural parts are constructed of white Australian marble" |Beneath the globe are four statues, representing Wisdom, Progress, History and Justice. Above them are four lions, and behind them a segment of the globe. Queen Victoria is represented in a standing attitude, crowned, wearing her robes of state and holding emblems of sovereignty. (Source: Official program of the unveiling of the monument, 24th May, 1907) News of the Queen’s death in 1901 saw a wave of public mourning throughout Australia. In Melbourne, a proposal for a memorial was raised with some urgency; Melbourne was thought to have been the only large city in the Empire without a statue honouring the monarch. It was apparently not enough that the state was named after her and the city after her first prime minister. More than £7000 was raised for the memorial through public subscription, and James White was to undertake the commission. There was controversy over the conduct of the committee in selecting White and over his insistence that the marble be sculpted in Italy, rather than in Australia. But on Empire Day 1907 the memorial was unveiled on a raised mound near Linlithgow Avenue in the Queen Victoria Gardens. The lieutenant governor of Victoria, John Madden, unveiled it. Victoria was born at Kensington Palace in London on May 24, 1819 and crowned Queen on 28 June 1838, when she was just 18 years of age. Lord Melbourne served as her first prime minister, educating her in politics and government. During her reign the British Empire reached its apogee, with vast colonies abroad and great industrial expansion and reforms at home. Notably, it was Victoria that changed the role of the monarchy to a symbolic one, the business of government being left to parliament.