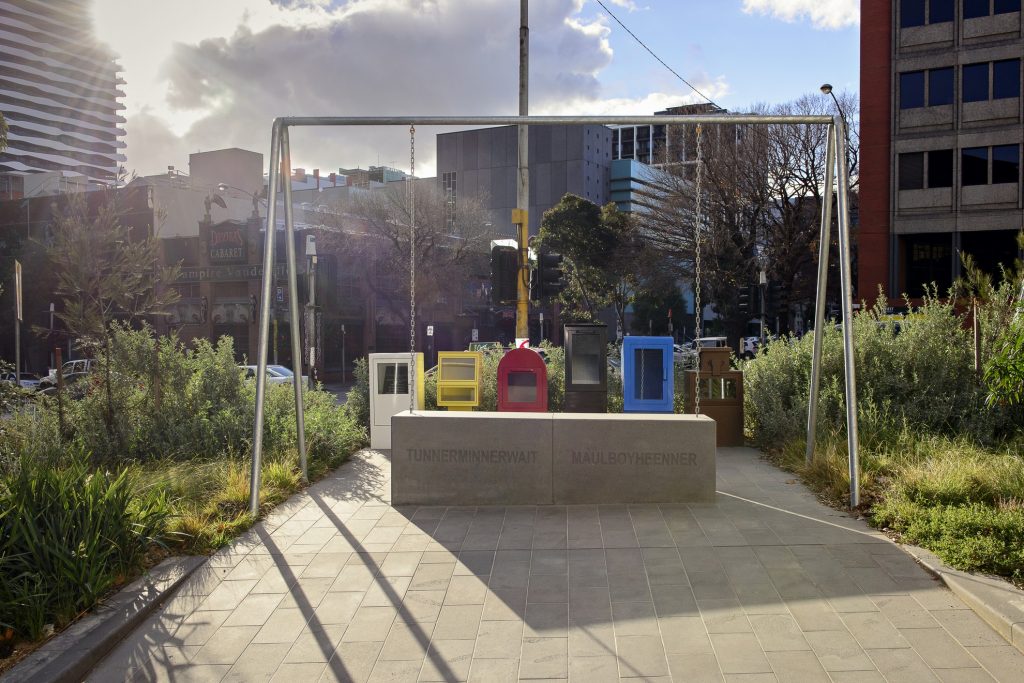 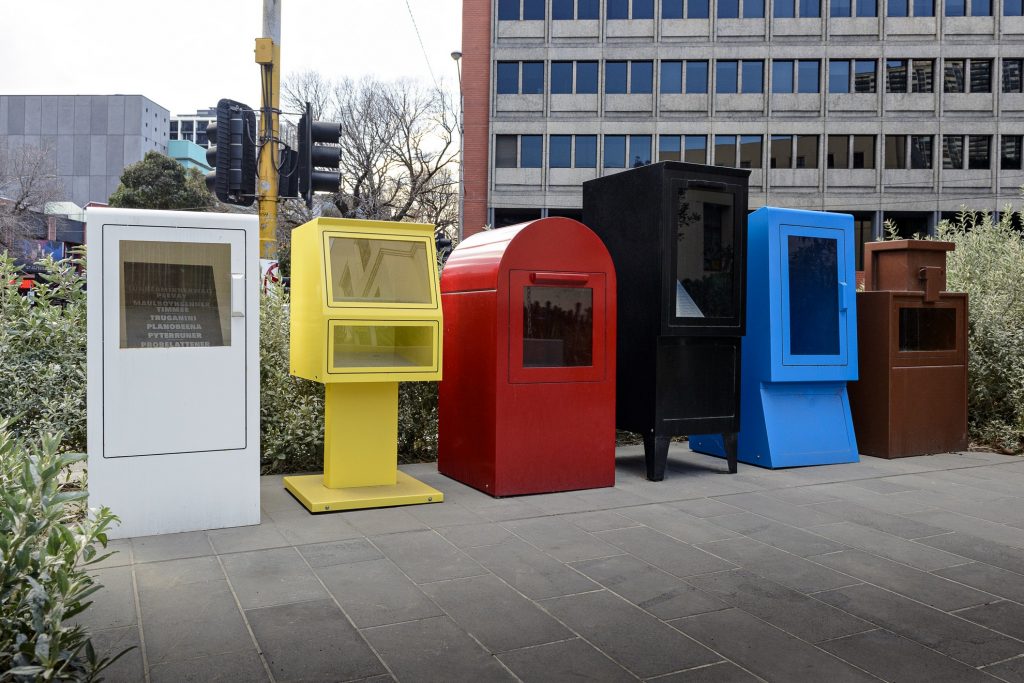 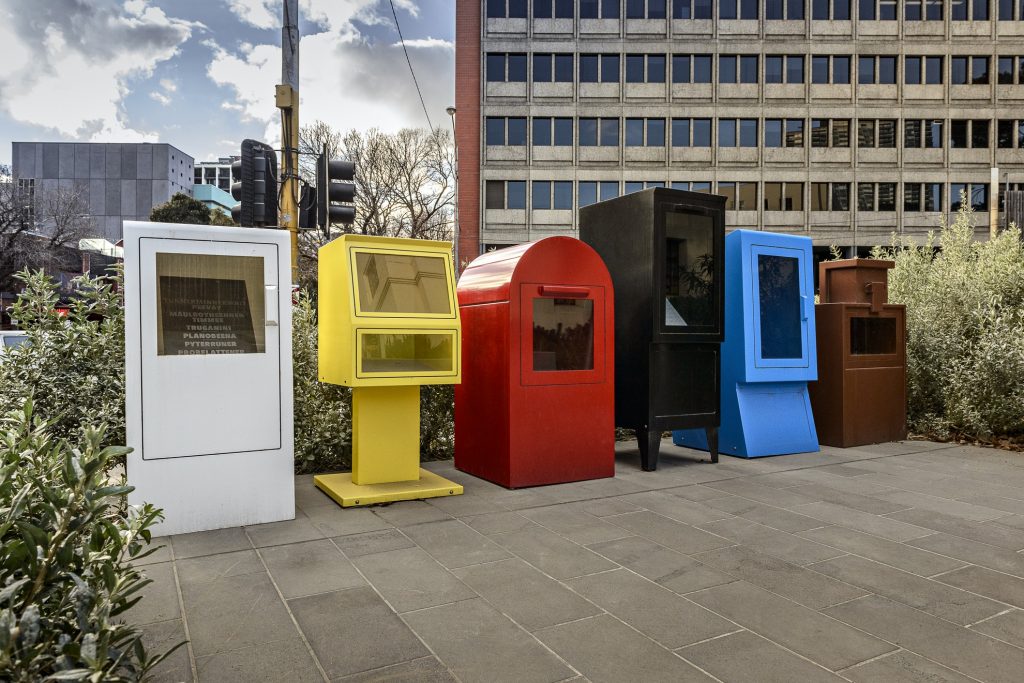 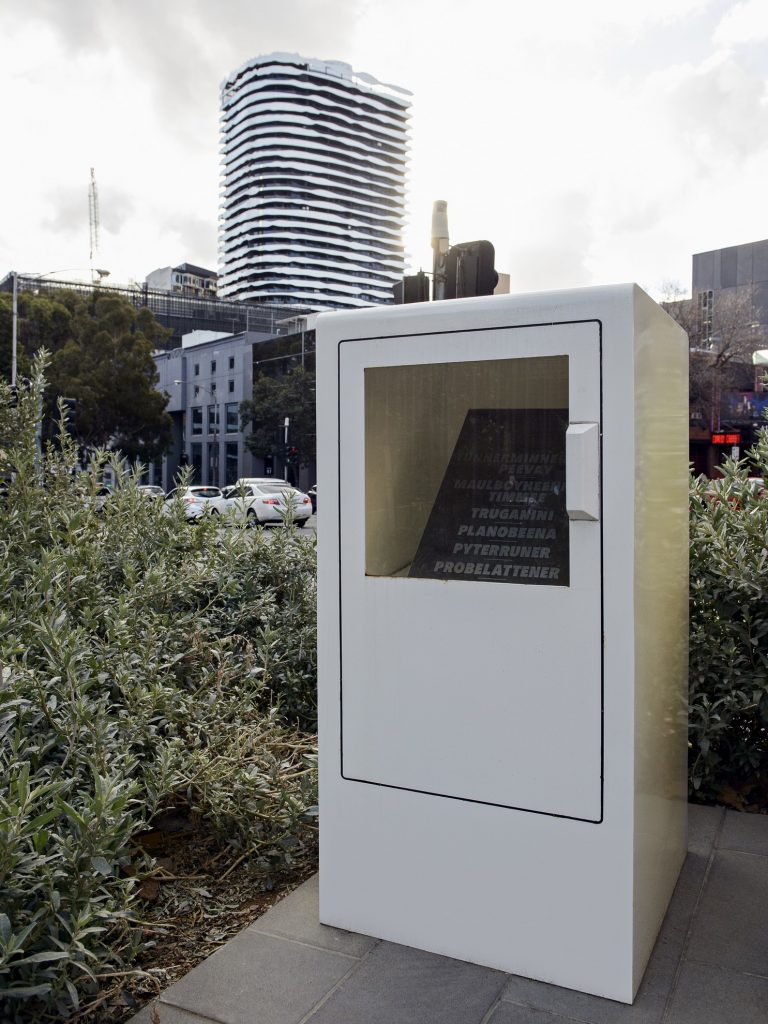 Location: cnr Franklin and Victoria Sts 'Standing by Tunnerminnerwait and Maulboyheenner' is a commemorative marker by artists Brook Andrew and Trent Walter, commissioned by the City of Melbourne in early 2016, and opened publicly on 11 September 2016. Artist statement 'Standing by Tunnerminnerwait and Maulboyheenner' is a permanent marker that is experimental and empowering. It begs contemporary viewers to embrace innovative processes of how to remember their tragic story through historical artistic representations of the ready-made object. The permanent marker comprises six brightly coloured newspaper stands, a static solid bluestone swing, indigenous food and medicine plantings and a reproduction suburban Victorian style fence. The brightly coloured newspaper stands represent colours of both the Aboriginal and Australian flags: red, white, blue yellow and black. Australian and Aboriginal law have often clashed and this story is one that represents this clash, hence the colours of the flags coming together. Newspapers in each stand acknowledge diverse early colonial and Aboriginal histories of Melbourne and Tasmania, heritage stories and the specific story of Tunnerminnerwait and Maulboyheener. The static solid bluestone swing and tomb-like structure with the names Tunnerminnerwait and Maulboyheenner engraved on the side invites visitors to the site to sit, contemplate and reflect. The children’s swing seat becomes the tomb, laden with memory and history. The pavement in bluestone and a woven wire gate reflect the nostalgic history of Melbourne. The bluestone path, a continuation from the Old Melbourne Gaol connects the two sites, signifying connection to a complex history involving crime and punishment in early Melbourne The structure sits amongst indigenous medicine plants that are useful for regeneration and native to the landscape of Parperloihener clan (Cape Grim), Iarapuna (Bay of Fires), Woiworung and Boonwurrung of the Kulin Nation (Melbourne). The viewer will learn not only about history and the significance of this story, but will also about the importance of Aboriginal medicines and land care, which relate directly to the care of the body and culture. 'Standing by Tunnerminnerwait and Maulboyheenner' creates an educational platform to ensure longevity of their story, and invites Melbourne locals and visitors to discover how this story informs our knowledge of Aboriginal history and contested histories of colonisation. Brook Andrew and Trent Walter