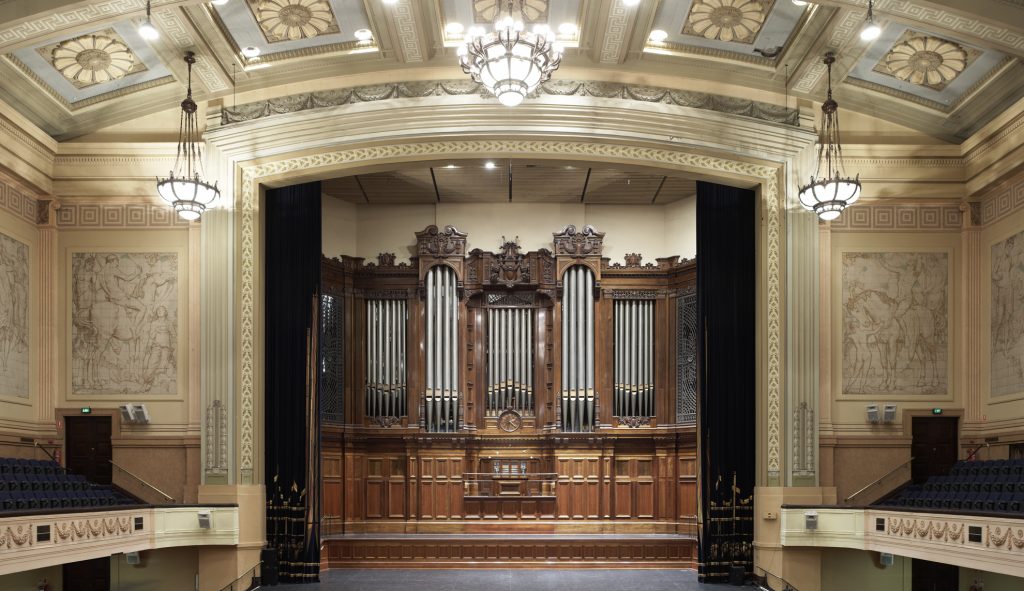 There have been two permanent organs installed in the town hall since 1872. The original organ was extensively rebuilt in 1905, and the second organ was installed in 1929 following the town hall fire of 1925. By the mid-1990s the Town Hall Grand Organ had fallen into disrepair and was greatly in need of refurbishing. Financial constraints in the past had prevented any major work being carried out on it for some time, and by 1997 the organ was unplayable. A Town Hall Organ Working Committee was established in 1996 to make recommendations for the restoration and enhancement of the organ, agreeing to a refurbishment program the following year. The contract to restore the organ went to the Schantz Organ Company of Orville, Ohio. The Schantz Organ Company employs some 70 craftspeople and artisans. It was founded in 1873 and is the oldest and largest American pipe organ builder still under management of the founding family. In January 1999 a team of nine Schantz staff visited Melbourne to complete the removal of the organ from the chamber and to pack it in containers for its journey to America. Some parts of the organ, including the largest pipes, stayed in Australia and were restored by Australian organ builders. When work was complete, the organ was returned to Australia. In 2001, after five years and $4.5 million dollars, work to restore and enhance the organ was completed. The City of Melbourne celebrated the completed refurbishment with a public concert on 25 May 2001, as part of the Centenary of Federation celebrations. The concert was the world premiere of a specially commissioned work by internationally renowned composer Philip Glass. Facts and figures - The organ stands at 9.75 m (32 feet) high. - The casework is made of Queensland maple with coin-bronze grilles. - More than 483 km (300 miles) of wire and more than 3000 magnets with 32,000 electric contacts were used in the electrical equipment. - There are 6024 pipes, the largest being the ‘Tibia Profunda’. - The organ was constructed of California red pine and contains more than 1000 m (300 super feet) of 50.8 mm (2 inches) thick timber. - The smallest pipe is the top note of the Tierce and is 9.3 mm (3/8 inch) in length with a diameter of 11.11 mm (7/16 inch). - The console has four manuals (four rows of keys) from top to bottom being: Solo, Swell, Great and Choir. - The Orchestral is a floating organ and is playable on all manuals by way of a rocking tablet on the key cheek of each set of keys. - The organ is blown by two electric motors, one 14.91 kilowatts (20 horsepower) and one 11.18 kilowatts (15 horsepower) and gives pressures from 215.9 mm (8.5 inches) to 7010.4 mm (23.5 inches) water pressure, as measured by a water pressure gauge. - The wind is delivered at a rate of 2548.53 cubic metres (90,000 cubic feet) per minute.