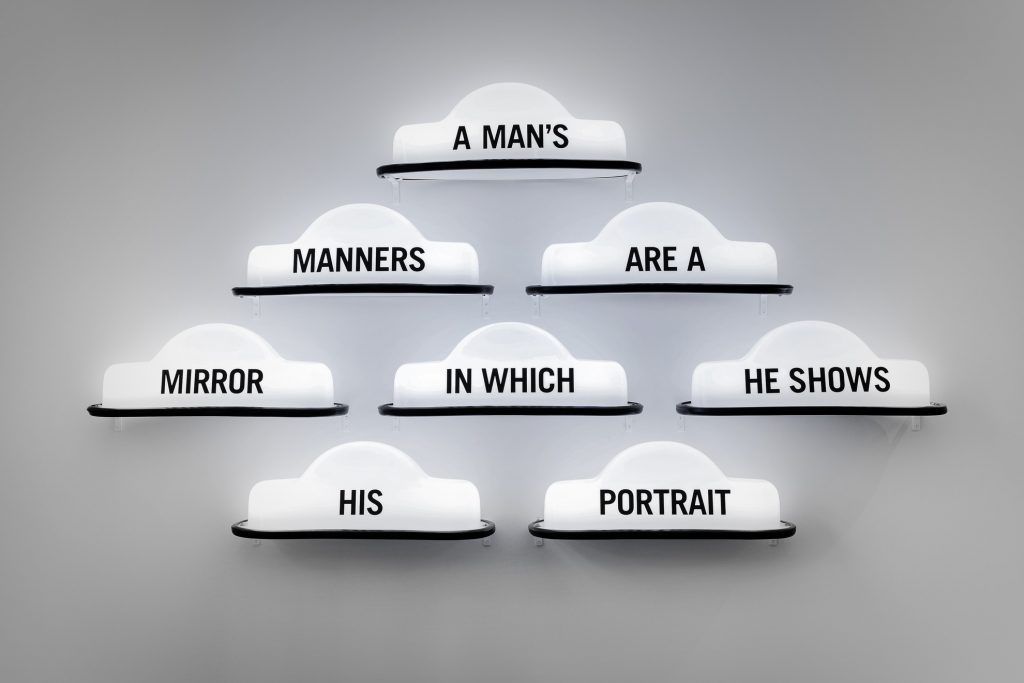 Even in the current era of Uber and the attendant ‘cabbie wars’, taxis remains a fixture on our city streets. And while the taxi is a convenient mode of transport, it is often a vehicle for much more than just the pragmatics of getting from here to there. People will open up in the neutral territory of the taxi – subjecting cabbies to their highs and lows, their yays and the neighs – often exposing their true colours. The driver also gets a front-seat view of the relationships unfolding in the back – relationships between one passenger and another, as well as between the passenger and their phone. The cabby is well positioned as an astute observer of human nature. Christine Eid’s sculpture installation ‘True Colours’ points to this portal to human nature, with the help a canny quip from Johann Wolfgang von Goethe: ‘A man’s manners are a mirror in which he shows his portrait’. The work comprises eight ‘Napoleon hat’ taxi dome lights illuminated via concealed electrical cords; the typography has been created through cut vinyl lettering adhered to each light. Dome lights such as these were introduced in Victoria in 1972 to clearly distinguish between taxis and private hire cars. With the industry reforms of 1994, the Napoleon hat became Victoria’s standard design, although as a result of the 2011–12 Victorian taxi industry inquiry, dome-light design regulations have been lifted. The City of Melbourne commissioned ‘True Colours’ for ‘Hello Yellow: Melbourne Taxis – Stories, Colours & Manners’, an exhibition Eid curated for the City Gallery and on display during May–July 2014. A social historian and daughter of a Melbourne taxi driver, Eid, much like a cabbie, was perfectly placed to interleaf Melbourne’s taxi history with sometimes-amusing, sometimes-disconcerting reflections on ‘a man’s manners’.