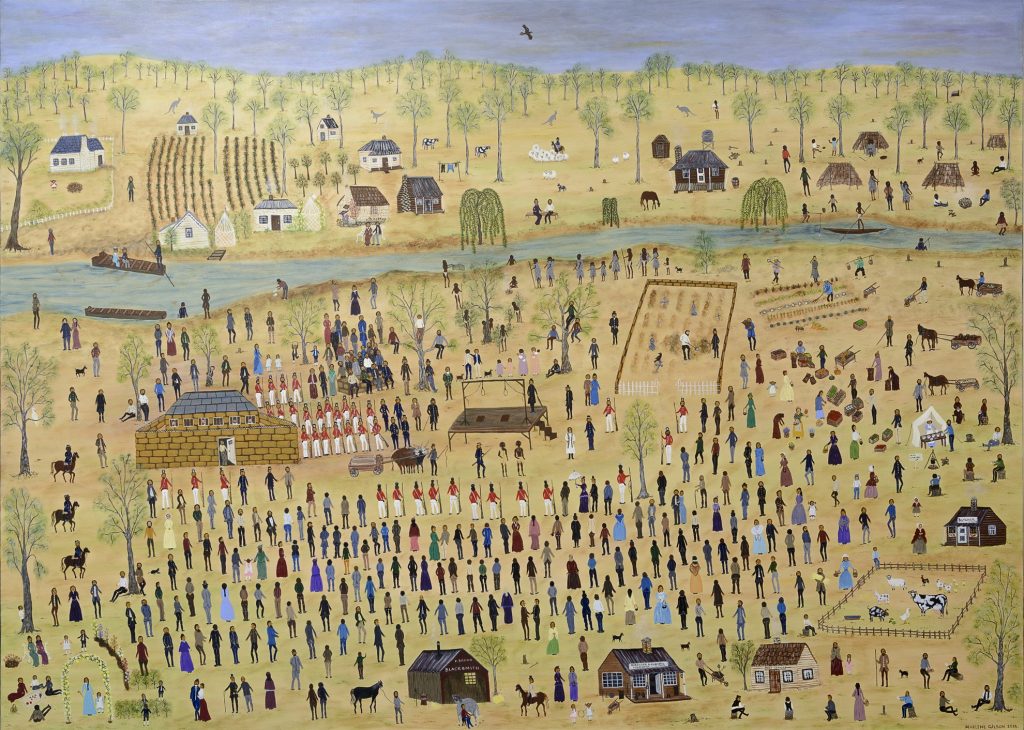 Wadawurrung Elder Aunty Marlene Gilson was born in Warrnambool, Victoria. She began painting in 2012, creating detailed and compelling history paintings grounded in the Wadawurrung past, the stories of which she learnt from her grandmother. Rendered in naïve style and a colourful palette, her paintings may initially seem charming and unassuming, but on closer inspection they reveal Gilson to be a sophisticated reader of historical events. In contrast to the accepted narratives of early colonial history, her Aboriginal perspective brings a unique and nuanced understanding to her visual accounts of the lived past. In 2015, the City of Melbourne commissioned Gilson to paint ‘Tunnerminnerwait and Maulboyheenner’ for the exhibition ‘Executed in Franklin Street’, curated by Paola Balla and held at the City Gallery from 26 November 2015 to 1 February 2016. The painting, like the exhibition, tells a sorrowful chapter in Melbourne’s early history, in which two Aboriginal men, originally from Tasmania, were hanged in 1842, in a public spectacle, for the killing of two whale hunters. Gilson depicts these resistance fighters as ‘men of dignity’, unshackled and resolute in front of a gawking crowd. The presence of Gilson’s totems, Bunjil, the airborne Wedge-tailed Eagle, and Waa, the crow watching from a gravestone above right of the gallows, seem to connect these men with culture and place. Gilson’s expansive pictorial stage suggests not the narrow colonial fixation on blame and retribution, with their inherent violence and shame, but a resilient Aboriginal community enacting its connection to country and culture through daily traditions. Gilson says of the work: ‘It was an honour to paint Tunnerminnerwait and Maulboyheenner. I hope I have done them justice.’ Following the painting’s display in ‘Executed in Franklin Street’, it was loaned to the Australian Centre for Contemporary Art for the exhibition ‘Sovereignty’ and to the National Gallery of Victoria for ‘Colony: Frontier Wars’. It was later shown at the Tasmanian Museum & Art Gallery, Hobart, and the Queen Victoria Museum & Art Gallery, Launceston, as part of the National Gallery of Australia’s touring exhibition, ‘The National Picture: The Art of Tasmania’s Black War’.