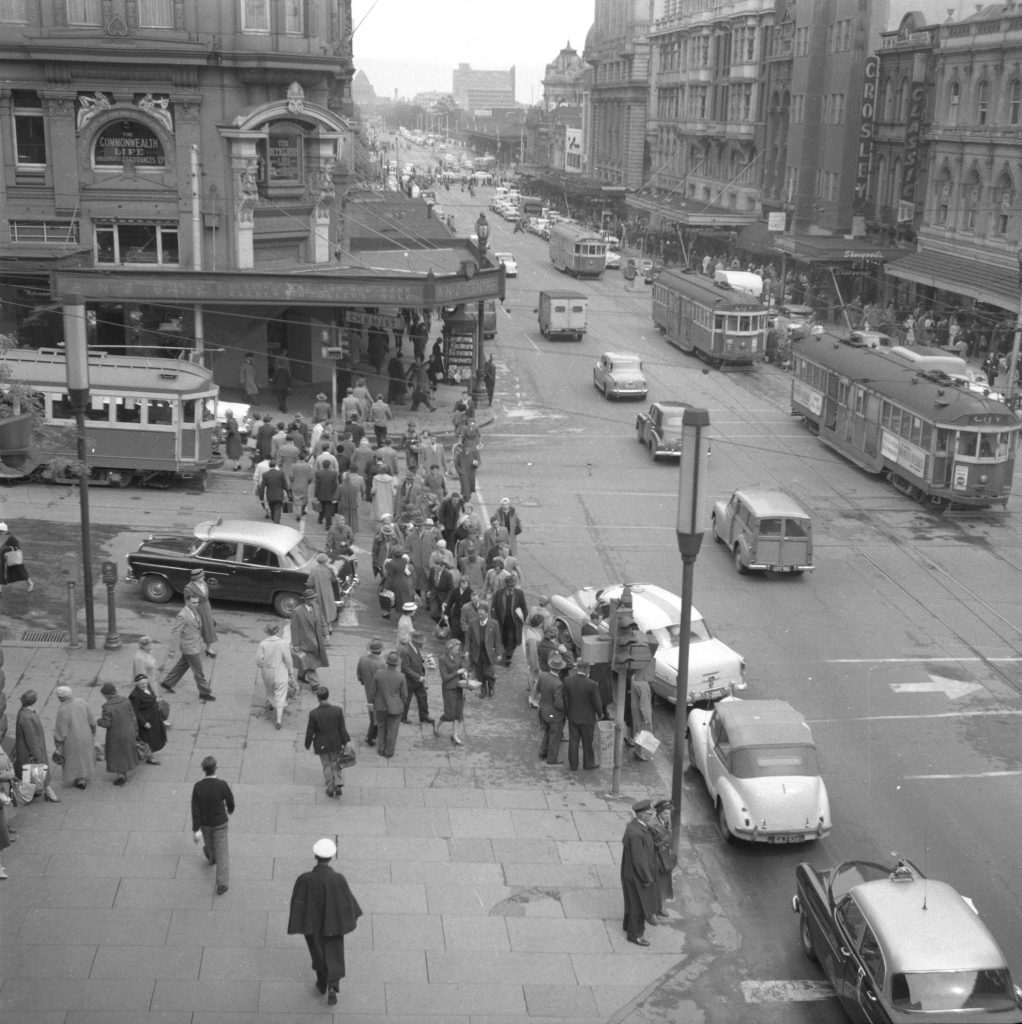 Unmarked book Negative A20 – Intersection of Swanston and Collins Street

A black and white negative of the Collins Street and Swanston Street intersection, looking down Swanston Street towards Flinders Street Station and the Shrine. Photograph taken from the Melbourne Town Hall portico by the Engineering Services Branch some time during the late 1950s or early 1960s as part of the Engineering Photofile. See also: AM#: 1751413 1751414 1751417 1751418 1751419 1751420 1751421 1751539 1751538 1751540 1751541 1751542 1751543 1751674 1751675 1751676 1751677 One of the collection’s outstanding series of photographic images is the ‘photofile collection’ of approximately 1600 medium-format negatives produced in the decade that followed the 1956 Olympic Games. During this period Melbourne moved rapidly towards becoming a modern industrialised city, embracing contemporary international design aesthetics with structures such as the ICI Building and Myer Music Bowl. The Engineering Branch itself was large and well equipped, and in 1965 it had more than 600 employees spread over three locations. The branch did its own work rather than managing contractors, and a great many of its projects were photographed, with the images printed and then pasted by category into large annotated books, ‘photofile’ books. These photographs, taken as records of activities and objects relating to the branch’s activities simultaneously say exactly what was originally intended – a pothole is a pothole, a trench is a trench – and yet a great deal more. A photograph is quite unaware of any singular intentions that its maker might have, and given the opportunity will include all of the minutia that makes up the chaos of daily life. This phenomenon, which American photographer Lee Friedlander defined as being indicative of photography’s 'generous' nature, provided photographer and curator Louis Porter with the framework within which he re-ordered and selected images from the ‘photofile’ archive for his 2009 City Gallery exhibition, ‘Research and Analysis’. Photography has dealt in elusive truths since its invention. Despite the intentions of its creator, the meaning of a photograph not only changes the further in time we move from it but also relies a great deal on the context we place it in. The City of Melbourne’s engineering photographs, originally part of the Engineering Branch’s own archive, now reside in the City's Art and Heritage Collection where their meaning and purpose has been re-evaluated. This is not to suggest that they no longer serve as records of engineering practices, but that they have also been augmented in their meaning through juxtaposition with a broader collection, which includes cultural and historical objects and documents, as well as evidentiary ones.