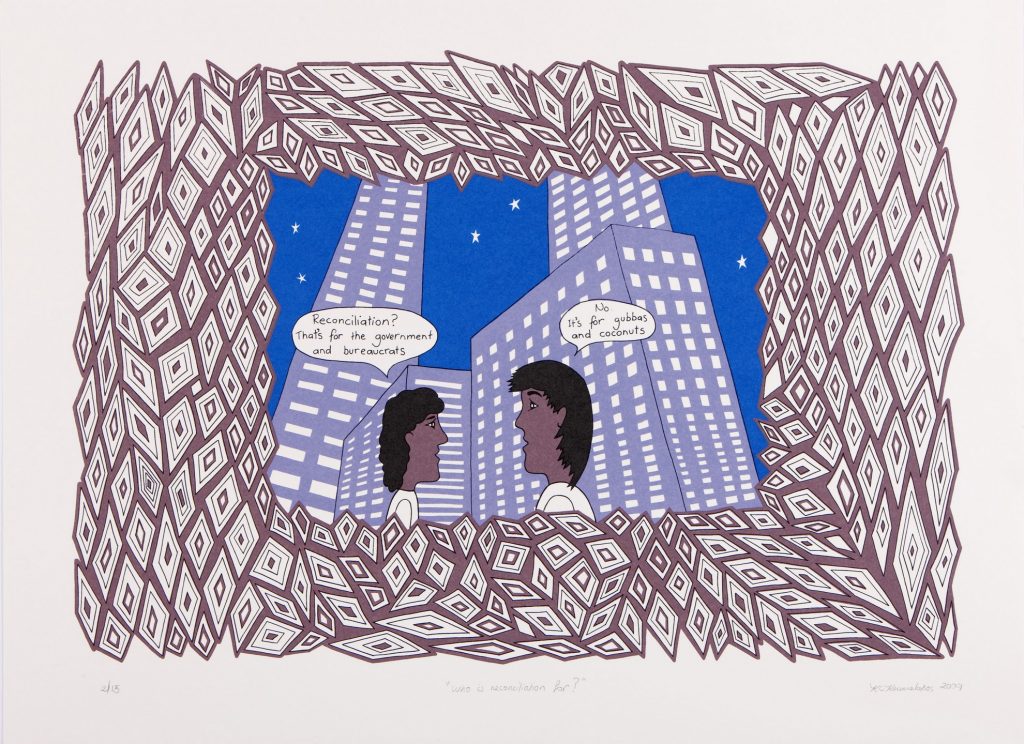 Who Is Reconciliation For? 2009

Who Is Reconciliation For?

Kelly Koumalatsos, 2009, What is reconciliation for?

The Art and Heritage Collection holds several works by Wergaia/Wemba Wemba artist Kelly Koumalatsos, including a group of six screen-prints on paper, of which this is one. Each of the limited-edition prints was acquired in 2010, following Koumalatsos’ exhibition ‘The Road to Hell Is Paved with Good Intention’, held at the Koori Heritage Trust in 2009. Koumalatsos is best known for her works investigating the significance and historical practice of possum-skin cloaks, reframing and revaluing these important cultural items within a contemporary context. This group of screen-prints, however, addresses another issue of Indigenous importance in an entirely different manner and register, not only in focus but also materially, tonally and aesthetically. In these works, Koumalatsos brings wry humour to bear in exploring the yawning gap that hews any notion of ‘real’ reconciliation in this country, despite the many good intentions that may drive it. Made a year after Kevin Rudd’s 2008 apology to the stolen generations, these deceptively simple, decidedly two-dimensional considerations of the concept are narrative works that drolly expose the ineffable cultural differences between Indigenous and non-Indigenous Australians. While they are humorous and subtle, they reveal reconciliation’s failure, particularly at a structural level, to really affect the lived experience of Indigenous Australians and to shift the unconscious assumptions and biases that underwrite business as usual. This image is dedicated to the memory of Lisa Bellear.